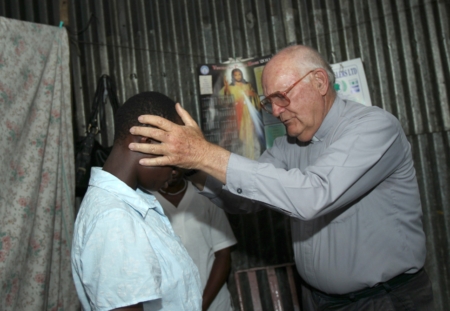 Maryknoll Father John Lange lays hands on a young woman with epilepsy in early February as he gives a blessing at a home in a slum in Nairobi, Kenya. CNS photo/Nancy Wiechec

Imagine this. You have arrived in a distant land. The language is different. The people there think differently. Electricity is not available everywhere. The weather is unpredictable. One other thing is that you have no home that you can call your own. You are there because you have answered the call of the Church's first missionary, Jesus Christ, who commanded his followers to go forth and to teach all nations and to baptize them in the name of the Father, and of the Son, and of the Holy Spirit.

When, the decree "Ad gentes," defined the mission of the Church as "the evangelization and the implanting of the Church among people or groups in which it has not yet taken root," the Second Vatican Council in effect made missionaries of all Catholics.

World Mission Sunday, on Oct. 23, is significant everywhere but it's particularly meaningful in the Archdiocese of Boston where the missionary spirit has always burned brightly. When the United States was still itself a missionary country, diocesan priests associated with Boston's Society for the Propagation of the Faith were planning the Catholic Foreign Missionary Society of America, commonly referred to as Maryknoll. This is also the 125th anniversary of the Holy Union Sisters, who arrived from France to aid poor immigrants here. World Mission Sunday will be particularly special for the Xaverian Missionaries as Pope Benedict XVI will officially use the occasion to canonize their founder, Guido Maria Conforti, a saint.

The generosity of people in the Archdiocese of Boston towards the Society for the Propagation of the Faith is legendary. Over the years, literally millions of people have financially supported the work of missionaries through the work of this admirable Society. Even children dropped a coin or two every day into a parochial school box for the missions. In 1958, Richard Cardinal Cushing established the St. James Missionary Society for volunteer diocesan priests to aid Latin American Bishops in Peru, Bolivia, and Ecuador where there exists a severe shortage of priests in remote areas. Boston's newly arrived diverse immigrant populations are advantaged by our "alumni" missionaries who welcome them to the universal Church while promoting human dignity among the poor of various cultures.

During the period in which we mark World Mission Sunday, four Religious communities within the Missionary Alliance in the Archdiocese of Boston will be featured. These include the Franciscan Missionary Sisters for Africa, Maryknoll, the Holy Union Sisters, and the Xaverian Missionaries.