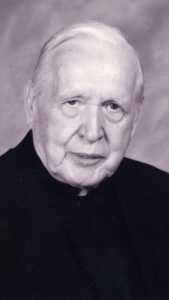 Cardinal Seán P. O'Malley was the principal celebrant of the funeral Mass for Msgr. Stanislaus T. Sypek, pastor of St. Adalbert Parish in Boston's Hyde Park section. Msgr. Sypek died on Oct. 2 at Marian Manor in South Boston, not far from the church where he celebrated his First Mass in January 1943, Our Lady of Czestochowa, at that time St. Mary Polish Parish.

A native of New Bedford he was born in the Whaling City on May 6, 1915. The Fall River diocese where he was born was barely 11 years old, and Benedict XV had been pope for less than a year. He was one of the four sons and one daughter of the late William and Agnes (Scierka) Sypek, both immigrants from Poland. The family moved to South Boston; after he completed high school he went to St. Mary College in Michigan and then returned to Boston College and St. John's Seminary.

Auxiliary Bishop Richard Cushing ordained him to the priesthood at Holy Cross Cathedral on Jan. 6, 1943. The aged William Cardinal O'Connell's health prevented him from ordaining the priests of the archdiocese. Only two priests survive who were ordained for the archdiocese by Bishop Cushing during Cardinal O'Connell's time: Msgr. Paul McManus, sole survivor of the class of 1942, and Msgr. Alfonso Palladino, the sole survivor of Msgr. Sypek's class of 1943; both reside at Regina Cleri.

In 1946 he began a series of non-parish assignments that would cover almost the next 25 years of his priestly life: The greater number of the assignments was to offices of Catholic Charities, first in Boston and then in Cambridge. During this same time he obtained MSW and MA degrees at Boston College, and a doctorate at Fordham University in New York.

He also taught at both Boston College and Emmanuel College during these years.

Just two months after he was elected pope, Paul VI named Father Sypek a Domestic Prelate (today, Prelate of Honor) on Aug. 10, 1963. He was in the first "batch" of new members of the papal household from Boston named by the new pope.

On May 21, 1969, Richard Cardinal Cushing named him pastor of St. Adalbert (Polish) Parish in Boston's Hyde Park section. During the course of his term there he saw many population shifts and changes but he never gave up serving the parish. He was named administrator of two other Polish parishes: St. Peter, Norwood (1982-1984) and St. Hedwig, Cambridge (1992-1995).

Msgr. Sypek was well known in the Polish Catholic Community in and beyond the archdiocese of Boston. And his friendship with Karol Cardinal Wojtyla, archbishop of Cracow and later Pope John Paul II was well known. He hosted the then cardinal on trips he made to the United States and was among the special guests welcoming him to Boston during his unforgettable 1979 visit to the Hub as Pope John Paul II.

The same pope named Msgr. Sypek a protonotary apostolic, the highest grade of monsignor on Feb. 7, 1992. The added honor highlighted an incredibly lengthy and active priestly ministry that would ultimately last more than 68 years. One of Msgr.'s great joys was to know that his old friend has been named a Blessed by Pope Benedict XVI.

Certainly there are many stories that have been and will be told about Msgr. Sypek. One that might best summarize his life was told by Father Richard Mehm who as pastor of St. Andrew Parish in Forest Hills served "next door" to Msgr. Sypek. "Every First Friday his brother in law Dick McNeil and his wife Leocadia would pick Stan up at St. Adalbert's and they'd all go on his Communion calls. He was always seated in the back seat, while Dick and Le sat in front reciting the rosary. Stan was silent in the presence of the Blessed Sacrament throughout. They started in Ipswich and drove back to Boston stopping at homes in Topsfield, Sale, Peabody, Lynnfield, and other towns along Route One and back to Hyde Park. It took most of every First Friday."

Msgr. Sypek was predeceased by his parents and his three brothers: Adolph, Chester and Edward. His sister Leocadia McNeil of Jamaica Plain is his surviving sibling.