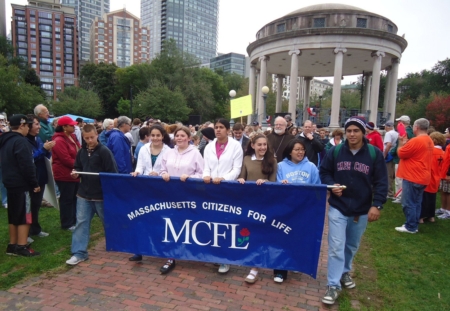 BACK BAY -- More than 2,200 pro-life supporters rallied and marched on Oct. 2 at the annual Respect Life Walk to Aid Mothers and Children, according to estimates by Massachusetts Citizens for Life.

At the rally held on Boston Common before the walk, speakers addressed the crowd on the nature of threats against human life in modern times. Between stem-cell research, euthanasia, and the sanctity of marriage, speakers tackled more than just abortion issues. Former representative Edward F. King was the master of ceremony and introduced speakers Brother Peter Mary, of the St. Benedict Center in Still River, Mass.; Seán Harrington, winner of the Jane Thompson Oratory Contest; and Cardinal Seán P. O'Malley.

Cardinal O'Malley rallied the crowd on the nuanced approach of the Catholic Church in regard to the stance of protecting all human life.

"Our commitment to the sacredness of life is what brings us here, and we see that life is threatened in many different ways," the cardinal said, in an interview during the walk. "Certainly two of the most dramatic threats to innocent human life are abortion and now physician assisted suicide."

As the walk began, heading out of the Boston Common to the streets of the Back Bay, a handful of female college-aged protesters approached, chanting, "Not the church, not the state, women will decide our fate!"

"We cannot be judgmental, it's not Christ-like," Marianne Luthin, director of the Pro Life Office and Project Rachel for the Archdiocese of Boston, said.

"You look at all the thousands of people here: they're smiling faces, they're people with families," Luthin added.

As the walk progressed under the protection of Boston Police motorcycles and bicycles, the cardinal greeted marchers and onlookers who approached him.

Seán Harrington, 18, marched with other young people near the front alongside the cardinal.

He addressed what he sees as a challenge set before young people.

"Everyone says, 'You're the future of America,'" Harrington said. "In a sense we're the present. We're here, and we're going to have to take the reins soon."

Though Harrington and others stressed the role of abortion and euthanasia in the Patient Protection and Affordable Care Act, passed by the Obama administration in 2010, the cardinal clarified that the Church is not categorically opposed to the parts of the bill which provide health care for all.

"The bishops have spoken out for health care for a long time, but what we want to see is that government funding for abortion be prohibited, as it was by the Hyde Amendment, and also that conscience rights protections be part of the package," he said. "We see great danger in people being forced to violate their conscience."

As the walk came back toward the common from Commonwealth Ave., the cardinal lowered his head and excused himself from interview as he prayed the Hail Mary along with the others.

Another of the walk participants, Judith B. Arnold, 68, who attends Star of the Sea Parish in Marblehead, saw a personal connection to the need to witness to the pro-life message of the day.

"This is one of the few opportunities that we have to publicly state that life is worth saving at any stage. And that's not just about abortion. It's about the Death With Dignity Act that's coming up," she said. "They're trying to get it onto the legislative agenda; kids don't even understand that could mean that people like me won't get care when we're old. It's the most important issue. If you don't have life, why have peace, or housing, or food?"