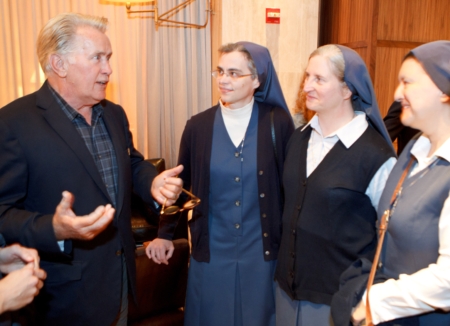 Actor Martin Sheen speaks with a group of Daughters of St. Paul at the reception held before the Boston preview screening of his new movie "The Way" Sept. 21. Pilot photo/Gregory L. Tracy

BOSTON -- For the past two months, father and son team Emilio Estevez and Martin Sheen have left the comforts of their homes and have set out on a pilgrimage of sorts across the United States.

Their reason -- to promote their new independent film, "The Way," which chronicles the experience of Tom Avery , played by Sheen, as he embarks on the thousand-year-old "Camino de Santiago" (The Way of St. James).

"El Camino," which begins in the French Pyrenees and continues to Santiago de Compostela on Spain's west coast, where the remains of St. James are believed to be buried, is one of the most travelled pilgrimage routes in the world.

Because "The Way" is an independent film, with little budget for a traditional Hollywood-style marketing campaign, Sheen and Estevez opted for a less conventional method of promoting their movie. They set out to market the movie themselves, hosting screenings in various cities throughout the United States hoping to build grassroots support and word-of-mouth recommendations.

One of their stops in their trek across the United States was the AMC Loews Boston Common theatre in Boston, where Sheen and Estevez, together with film producer David Alexanian, hosted a private reception and screening of the film for local Catholic ministry and media leaders on Sept. 21.

"We don't have a $50 million campaign but we have a $50,000 bus," Alexanian told the audience during a short question and answer session after the film.

"We're out here on the road now presenting it because we didn't want to just send it out," Sheen added. "We wanted to carry it gently, like a newborn, and not have it die from neglect. And the only way we could trust anyone to do it was to do it ourselves."

The film tells the story of California ophthalmologist Tom Avery (Sheen) who is faced with the tragic news that his son Daniel (Estevez), with whom he had a rocky relationship, has accidentally died along "El Camino." Avery then sets out to complete his son's journey. Along the way, Avery meets three fellow pilgrims whose journeys -- both physical and spiritual -- become intertwined.

Estevez acknowledged that getting Hollywood to back a movie about one man's pilgrimage to Santiago was "certainly a tough sell."

Noting that the movie is character-driven and includes no car chases, violence or sexuality, "there's nothing Hollywood celebrates in this film," Estevez said.

"We can blame Hollywood, and say that Hollywood continues to produce what they produce, but in truth all Hollywood tends to do is to copy and recreate. They don't create things, which is what I believe Emilio has done here," Alexanian said.

According to Estevez, who wrote, directed and starred in "The Way," the initial inspiration for the film occurred in 2003, when Sheen had "a romantic notion of travelling El Camino."

Estevez recalled that his father was "woefully unprepared," with only two weeks to make the journey. Sheen was unable to complete the pilgrimage, but his desire never waned. Instead, he turned to his son, and together they created the manuscript for "The Way."

"This film is a reflection of both of our hearts." Estevez said.

Sheen agreed, adding that the film was also a personal journey for him. "It's an effort to unite the will of the spirit to the work of the flesh," he said.

"These word-of-mouth screenings are really our hope of making this film a success. [The film's success] is up to you really," Alexanian said.