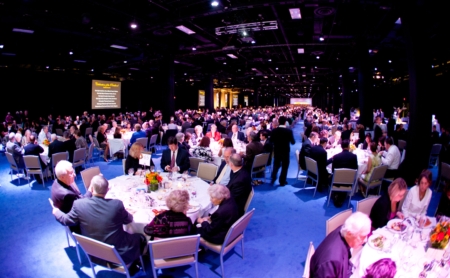 Nearly 1,100 guests fill the banquet hall of the Seaport World Trade Center for the 3rd Annual Celebration of the Priesthood Dinner to support the medical and retirement needs of priests. Pilot photo/Gregory L. Tracy

BOSTON -- Cardinal Seán P. O'Malley had another name for the dinner honoring priests on Sept. 21, one which was inspired by a youngster asking him if he was the "communion guy."

"So I'm here tonight with all of you to celebrate this 3rd annual dinner in celebration of the communion guys," he said.

Cardinal O'Malley's remarks were a part of the Celebration of the Priesthood dinner which, for the second year running, grossed $1 million for the archdiocesan Clergy Funds. There was also an additional $150,000 gift to be given over the next two years.

Over 1,100 people attended the dinner held in a cavernous banquet room at the Boston's Seaport World Trade Center, whose entrance was adorned with nine priestly vestments of different colors and eras.

The evening was organized by the archdiocese's Boston Catholic Development Services (BCDS) and Clergy Funds and a dinner committee. According to BCDS, the costs of the evening were around $225,000.

Father Robert Reed, the president of the CatholicTV Network emceed the event.

Doug Kingsley, who co-chaired the dinner with his wife Joanie, delivered the evening's remarks.

"If you think about it, our priests baptize us, they confirm us, they marry us, they hear our confessions, they anoint the sick and dying, and most importantly they bring us the body of Christ in the Eucharist," said Kingsley.

Joseph D'Arrigo, executive director of the Clergy Funds, gave an overview of the purpose and needs of his group.

He reported that from a $10 million deficit two years ago, they are projecting a breakeven operating budget at the end of fiscal year 2011. This happened without a cut in priests' benefits, and by utilizing Medicare and Medicaid, along with the contributions of Mass collections and the dinners, he said.

"Just because we have stabilized the fund, doesn't mean we can rest; the intensity must continue," he said.

He called on attendees to take the message of supporting priests to their parishes and spoke about celebrating "the priests who have walked the walk quietly."

"It's honoring the good men that serve in a 24-7 job for most of their lives and it's also about fulfilling a promise we made to them to take care of them when it comes time for them to slow down a little bit," said D'Arrigo.

Boyle, who recently was inducted into the Catholic Education Foundation Hall of Fame, spoke of the influence of priests at his home parish of Resurrection of Our Lord and Savior Jesus Christ in Hingham, Boston College High School, and St. Joseph's College of Maine. He recalled how priests comforted him at the death of his brother and the illness of his father, along with their friendship, humor, and tutoring.

"Priests are our leaders, they are men that have responded to the call of Christ to show us all the way. The sacrifice and devotion it takes to follow that calling is something that is not lost on me and judging by your attendance here tonight it isn't lost on you either," said Boyle.

In his remarks, Cardinal O'Malley called "the communion guy" a great description of the priesthood.

"Not just the sacrament, which is the center of our existence as Catholics, the Eucharist; but the communion that is the unity of Christ's family in the Church, our connectedness to God and one another," he said.

The cardinal said that prayers for vocations are bearing fruit in Boston, with many young men responding with a desire to serve the Church and the people of God.

He concluded with an acknowledgement of the collaboration between the clergy and the laity, a theme that was apparent with speakers throughout the night.

"We are here for you, but you have been there for us too," said Cardinal O'Malley.

The evening had numerous moments of humor sprinkled into the overall message of honor. Before Msgr. James Tierney gave the closing benediction, he remarked that he and the priests at his dinner table-- numbered 99-- were in unanimous agreement about the dinner entree.

"That this has been the best meal we've ever had at a 99 ever," he said, referring to the restaurant chain.

The evening's program ended with Father Mark Murphy leading all the priests in attendance in singing the "Salve Regina."

Willam Wallace and Kathleen Moran-Wallace of Our Lady of Good Counsel Parish in Methuen were among the many benefactors representing 75 parishes of the archdiocese. Wallace was impacted by the video.

"It was powerful to the point of tears of joy, for all the service they do for their parishioners," he said.

He also referred to the priests as having a 24/7 job.

"It just strikes home how much we really appreciate all they do for us," he said.