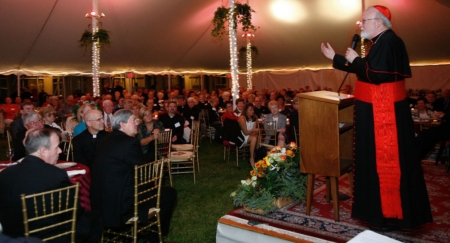 "Now Goldman is not a typical last name you might expect of someone considering the priesthood," he said after the audience's laughter subsided.

"You may be asking yourself, 'What's a nice Jewish boy doing at seminary discerning a vocation to the priesthood,'" asking the question in a caricatured accent.

Goldman, a convert form Judaism, is one of 66 men from 34 U.S. dioceses and four religious communities studying at Blessed John XXIII seminary. Attended by over 350, this year's annual lawn party raised roughly a quarter of a million dollars to support the seminary, which educates men who are discerning what is called a late, delayed, or second career vocation.

"I think the seminary's mission is more valid than it ever was," said Msgr. Dennis Sheehan, former rector of the seminary and a facilitator of the first lawn party in 1981.

"People sense that the grace of God is moving here and these later vocations are a great advantage to the Church," he added.

LaRossa and his wife Gretchen have chaired the party for the last three years.

"We the laity recognize that by accepting your call to the priesthood, you have found your way home to our loving Father and now you must learn how to lead us, your supporters, home also," said LaRossa.

Before joining the seminary, Goldman, 48, was a librarian for a major law firm in Boston, but previously considered moving to Israel to become a rabbi. He earned a Master's degree in philosophy at Boston College and struggled for years about God's plan for him. He said he questioned the foundations of his belief in God, wandered and held God at arm's length, but was in fact searching for the faith of his youth.

At one point, he read from the Gospel of Mark and was struck at Jesus' question to his disciples of "Who do you say that I am?"

"This was not just some text in a book, but Christ himself posing the same question to me and waiting for an answer," said Goldman.

Influenced by C.S. Lewis, eventually Goldman came to accept the divinity of Christ. After consulting many priests and through prayer, he started the RCIA program at St. Catherine of Genoa Parish in Somerville in 2009.

Nolte, 47, told the audience that he distinctly remembers kneeling beside his bed and praying to God that he would have a servant's heart at the age of 12. Though not raised in any faith, he had been going to a friend's Presbyterian church and had read most of the Bible.

At age 20, reading St. Augustine's "Confessions" made a significant impact in Nolte's life.

"I've read hundreds of books before, but this was the first time in my life I felt like I was having a conversation in the book with a living person," he said.

Nolte was baptized and confirmed as Catholic at age 24. In the ensuing decades, Nolte worked as a bartender, farm hand, lawyer, carpenter, physical therapist, a teacher from middle school through graduate school.

"You might say that's a varied resume, or you might say, 'Well, [he] can't hold a job," quipped Nolte.

After his various roles had taken him across the country and abroad, he returned to the East Coast to help his mother who was ill. Spending time with some Benedictines as a lay intern, Nolte said he was able to change his question to God. Instead of asking about his own desires for a call, Nolte was able to ask the Lord about his desire for the journeyman's life.

"I heard quite clearly, 'I want you to be a priest,'" said Nolte.

From the diocese of Springfield, Nolte is due to be ordained this spring.

In his remarks, Cardinal O'Malley recalled that Blessed Pope John XXIII said a person can have a vocation at any point in life. These words inspired Cardinal Richard J. Cushing to found the seminary in 1964.

The cardinal called the seminary "a treasure for the Church in our country." He said in each of his four dioceses where he has been bishop, he had "wonderful" priests ho were graduates of Blessed John XXIII seminary.

He expressed his gratitude to the men attending the seminary and discerning a vocation. The cardinal also said that he is always impressed with the witness talks of the seminarians, which is a chance for him to listen to them, instead of presenting a talk to them.

"And we're grateful to all of you whose friendship and generosity make it possible for this seminary to exist. Our Catholic people love our priests and this is just one more proof of it," said Cardinal O'Malley.