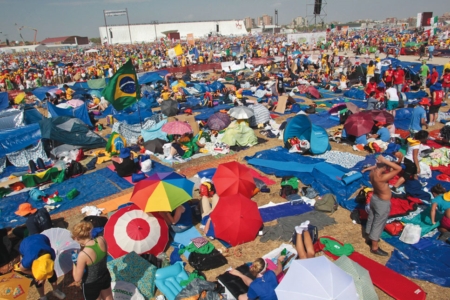 Some of the 1.5 million pilgrims who took part in the vigil and Sunday Mass with Pope Benedict try to stay cool under umbrellas and makeshift shelters in the intense heat at Cuatro Vientos airfield, Aug. 20. Pilot photo/George Martell, The Pilot Media Group

A pilgrimage is a "journey within." This past August, I joined more than 400 teens from the Archdiocese of Boston to "journey within" when we embarked on a pilgrimage to Madrid Spain for World Youth Day. My group of twenty was just part of roughly 1.5 million who gathered in Spain to celebrate our Catholic faith. Our group traveled from Our Lady of Good Council Parish in Methuen, Saint Rita's Parish in Lowell, and Saint Mary's Parish in Chelmsford. When I think back on the trip, I can recall each event with amazing clarity: from the opening Mass, to the ceremony welcoming Pope Benedict XVI, to the Stations of the Cross with the Holy Father, and finally the overnight Vigil and Mass in the field. And yet, none stand out in my mind more than one event that wasn't even planned. It came on Saturday, Aug. 21. Boston pilgrims celebrated Mass with Cardinal Seán on Saturday morning. After Mass, our group, led by Father Marc Bishop, pastor of Saint Rita's, noticed that the street we were walking on was being prepared for what we assumed to be the route the Holy Father would be traveling. The pope had been saying Mass at the Cathedral of Madrid and we just happened to be walking on the street that led to the cathedral. After waiting for two hours, the moment came. To our excitement, after much anticipation, we spotted the Pope-Mobile with the Holy Father headed our way. The street was narrow and we were right on the curb. I was extremely excited. The Holy Father came by slowly and waved. I was in awe as I'm sure the rest of our group was. We were within 5 feet of his Holiness, a moment in time I will never forget. By taking a "journey within," my faith grew exponentially and I was blessed with memories that will be with me always.