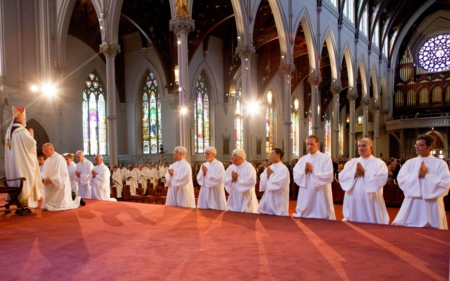 SOUTH END -- On a crisp, sunny, September morning at the Cathedral of the Holy Cross, Cardinal Seán P. O'Malley ordained 13 men as permanent deacons for the Archdiocese of Boston.

All of the men ordained on Saturday are married and their occupations include an anesthesiologist, an air traffic controller, a grocery store clerk and health care interpreter, a mortgage banker, a software consultant, two professors, a retired civil engineer from the city of Boston, a director of religious education, and a high school campus minster and teacher.

"In common, they have a very deep spiritual life, a very deep prayer life -- they're all centered on the Eucharist and that's where the call came from," said Deacon Dan Burns, director of formation for the Office of Permanent Diaconate.

"They're all very connected in their families and in their parishes," he added.

After the reading of the Gospel, the men were called by name and presented to Cardinal O'Malley, who asked if they were known to be worthy. Their worthiness affirmed by the presenter, the cardinal invoked the help of God and said that the men were chosen for the order of the diaconate.

In his homily, Cardinal O'Malley gave a historical context of deacons in the Church, referring to the Acts of the Apostles. Beyond administrative duties, the first deacons soon started to preach, evangelize and baptize.

The cardinal asked the men to commit themselves to prayer and said that "it is your interior life of friendship with the Lord that will allow you to be ministers of God's people."

He remarked that the Gospels do not speak of "CEOs, managers, overlords, or the grand poohbah" -- rather it highlights the servant. He said that in today's world of political correctness, the word servant is avoided in favor of terms like domestic worker or household technician.

"Never forget what deacon means; it means servant. High maintenance is an adjective that should never apply to a deacon. Love, humility, generosity, obedience are the virtues that must adorn your service as God's deacons," said Cardinal O'Malley.

He exhorted the men to foster unity in the Church, to be of great patience, and to take care of God's "little ones" including the homeless, the sick, the elderly, and the addicted.

"Be the advocate for the immigrant, the unemployed, the man left half dead on the road to Jericho, the Alzheimer's patients, the schizophrenic -- Christ in a distressing disguise," he said.

The cardinal called on the men to love the Scriptures, to teach the truths of the Catholic faith in season and out, and to love the Eucharist -- calling it the center of the lives of believers.

He also had a reminder for the married men.

"As you know, deacons cannot remarry if your wife dies and so take good care of your wives," the cardinal said, prompting laughter from the congregation.

He concluded his homily by calling on the intercession of Mary to bless, protect, and assist the men in their ministry.

Following the homily, the men affirmed to the cardinal their undertaking of the office of diaconate, including praying the Liturgy of the Hours, and conforming their way of life to Christ's example. Individually, the men approached the cardinal and pledged their obedience to him and his successors.

Then in a gesture of humility, the man laid prostrate in front of the altar while the choir led the congregation in the Litany of the Saints.

After this the men, one by one, approached Cardinal O'Malley in front of the altar and knelt before him. The cardinal placed his hands on their heads, conferring the Holy Spirit and praying silently the words of consecration. These actions are central to the sacrament of Holy Orders.

Following this, the wives of the new deacons presented them each a stole and a dalmatic, vestments that signify the diaconate. Each man also chose a priest or a deacon to help them vest in these new garments.

The cardinal then presented each man with a book of the Gospels.

"Receive the Gospel of Christ, whose herald you have become. Believe what you read, teach what you believe and practice what you teach," said Cardinal O'Malley to each man.

The cardinal and other deacons in attendance then gave the new deacons an embrace of peace and words of congratulations.

In the liturgy of the Eucharist, the new deacons gathered at the altar and helped with the distribution of Communion.

Following the Mass, family, friends and well-wishers greeted the new deacons -- who can now bless, baptize, witness the sacrament of marriage and administer a gravesite service.

Boston mayor Thomas M. Menino attended the Mass in part to support his colleague Deacon James Leo who worked for the city for 41 years.

"You couldn't have a guy who's more grounded in real people and helping people's lives," said Menino.

Deacon Leo said that he was on a "Christ-like high" following the Mass. He noted the laying on of hands by Cardinal O'Malley, as a moment that struck him.

He credited his wife Vivian in being there every step of the way in the formation process.

Jen Connelly, the wife of Deacon Chris Connelly, said the ordination of her husband, "pretty much stacked right up there," with her wedding day.

The Connellys have three children: Shannon, 7, Brendan, 13, and Zach, 15. The two boys were altar servers at the ordination Mass, and Brendan had a close up view of seeing his father receive the book of the Gospels.

"It was just kind of a surreal experience," said Brendan about the ordination and also called it a "heartfelt wonder."

Deacon Burns, who guided the men through a significant part of their formation called the ordination of the men a "very powerful, profound moment for me."

"I felt like a father marrying off 13 of my children on one day," said Deacon Burns.