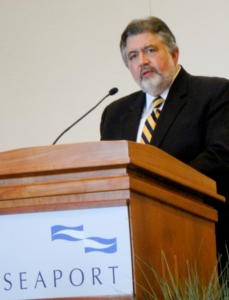 BOSTON -- The Chief Justice of the Massachusetts Appeals Court, Phillip Rapoza, extolled the lessons of St. Thomas More in a keynote address to Catholic judges, lawyers and others in the legal community at the Red Mass luncheon on Sept. 18.

"If St. Thomas More was a man for all seasons, he was especially a man for this season, by which I mean the 21st century," said Rapoza.

The luncheon, organized by the Catholic Lawyers Guild of Boston, followed the annual Red Mass held at the Cathedral of the Holy Cross. The Mass is a tradition dating back to the Middle Ages, held to invoke the power of the Holy Spirit in guiding members of the legal profession before the beginning of the judicial year.

St. Thomas More, who was a husband and a father, is well known for refusing to take an oath supporting the nullification of King Henry XIII's marriage, and to relegate the authority of the pope in England. This led to the saint's imprisonment, being charged with treason and his eventual execution in 1535.

"St. Thomas More illustrates that potentially there is greatness in each of us, but the events of his life should not lead us to conclude that short of martyrdom there is no call for moral heroism. Nothing could be further from the truth," said Rapoza.

Before becoming the Chief Justice of the Massachusetts Appeals Court in 2006, Rapoza spent time in private practice, as an assistant district attorney and as an associate justice of the Massachusetts Superior Court. He is also known for taking an unpaid leave of absence to serve as the chief international judge on the Special Panels for Serious Crimes in East Timor, a United Nations founded group, from 2003-2005.

Rapoza said that every person faces daily choices, but the burden is heavier with those in charge of the welfare of others.

He suggested that one should be able to recognize critical moments and then know how to act in them.

"We must ask ourselves, will we recognize our Thomas More moment when it comes? Will we see that we are being tested, even though we are not being dragged from the tower and hauled before a mockery of a court," said Rapoza.

He called these moments more subtle and with less attention that the one that St. Thomas More found himself in.

"Indeed we are less likely to find ourselves teetering on a great moral precipice and more likely to catch ourselves about to slide down a slippery slope," said Rapoza.

He said the moral courage is "sometimes taking the first step, and not simply in refusing to take the last one."

"We, like More, must be prepared to own the consequences of our choices and to live with vthem, even if unlike him, we need not die for them," said Rapoza.

Rapoza called for mutual support and assistance in this cause.

"In such an effort, it is reassuring to know that a great saint is at our side and that -- as he said on the scaffold in this world -- he will pray for us in the next," said Rapoza referring to St. Thomas More's words on the way to his beheading.

Danielle Huntley, 27, an immigration attorney in Boston, said she enjoyed learning more about St. Thomas More, that there are things worth fighting for, and that "as a lawyer you cannot divorce your personal integrity from your practice."