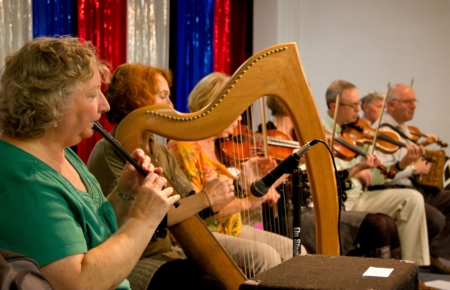 DORCHESTER -- For the last 24 years, the Irish Pastoral Centre has served Irish immigrants and Irish-Americans as a hub for cultural, spiritual and practical matters -- such as immigration advice and counseling. But perhaps its first impression, to scores of immigrants, has been a warm welcome.

On Sept. 8, the Irish Pastoral Centre (IPC) marked its recent move from Quincy to St. Brendan Parish in Dorchester with an open house with Irish music, dancing, refreshments and good "craic" -- the Irish Gaelic word for fun, laughs, and good conversation.

Father John Connolly, the pastor of St. Brendan Parish, estimates that 20-25 percent of his congregation are Irish born and said the addition of the IPC is a "hand in glove" fit for the parish, already steeped in Irish heritage. The IPC's first home was at St. Mark Parish, also in Dorchester.

Michael Lonergan, consul general of Ireland in Boston, said many Irish immigrants arriving to the United States "remember that when they came here first, it was the Pastoral Centre that provided the welcome on the mat, put them in touch with people in the same situation as themselves and helped them out."

The center is a collaboration of the Church and Ireland's Department of Foreign Affairs, the latter providing much of its funding, though the center is seeking other avenues to raise funds.

In addition to Lonergan, vice-consul of Ireland for Boston Deirdre Ni Fhalluin, vicar general and moderator of the curia for the Archdiocese of Boston Monsignor Robert Deeley, and auxiliary Bishop Robert Hennessey attended the open house.

Besides a bigger space, the IPC has a wide breadth of programming this fall geared for Irish nationals and Irish Americans, but open to everyone.

IPC activities include a program for mothers to teach their toddlers Irish traditions, an upcoming marriage preparation group and a six week bereavement support group. But guidance and support to Irish immigrants -- both documented and undocumented -- is a cornerstone of the center.

Though signs reading "Irish need not apply" no longer hang in storefront windows, Irish immigrants today still face significant challenges, which can lead to a sense of isolation and depression.

Both Father John McCarthy, chaplain for the IPC and on loan from the Limerick diocese, and Sister Marguerite, former director of the IPC and current pastoral associate, are available for counseling. The IPC can arrange additional counseling from a variety of resources if needed.

Father McCarthy said that in recent years he has seen an increase in the suicide rate of Irish nationals in the area and said isolation and not being able to return to Ireland are part of the cause.

But he has also seen young Irish returning to Mass who tell him they feel at home in church, knowing their family in Ireland is also in church.

Kieran O'Sullivan, immigration consultant for the IPC, helps people to obtain visas, permanent residency and for some, U.S. citizenship. He said it is challenging for newly arrived immigrants to get the right information about visas, along with finding employment and accommodation.

Helen Henry -- who will be the new chair of the board for the IPC starting in October -- arrived in the U.S. in 1987 as a young teenager with her four siblings and parents. Today, she is human resources manager for Covidien, a medical technology company.

"I wish I'd had access to something like this when I was a teenager. A group like this just makes you feel like you have a bit of a home or that you're grounded," said Henry.

Henry would like to further develop programming for the IPC around economic empowerment on both the community and personal levels. She would also like to build up support for mothers with newborns and boost overall health awareness for the community.

She also added she would like to help "develop people who can ultimately go home and help our own country."

In late October, the IPC's Senior Citizen Outreach Program will begin a program for those with cognitive impairment, like the onset of Alzheimer's or dementia, called "Music for Memory." Participants will be encouraged to sing along with traditional Irish music that could improve their brain activity.

Other seniors, who have recently lost a spouse, attend the IPC's weekly coffee mornings for fellowship.

Alicia Connors, executive director of the IPC said that for the seniors "it's a new beginning, it's new friendships, it's going back to their roots, and getting in touch with the songs that they love, the stories that they love, and sort of that cultural connection that they have with each other."

Connor said that in the future she hopes to increase funding and build the outreach of the IPC.

"While we are in a parish neighborhood, everyone is welcome here. We don't have any boundaries," said Connors.