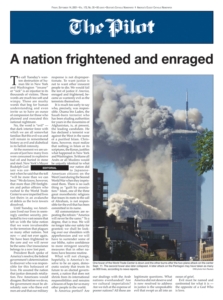 Below is the reprint of the Sept. 14, 2001 front page Pilot editorial on the terrostist attack on America. The editorial was penned by then executive editor Msgr. Peter V. Conley.

To call Tuesday's wanton destruction of human life in New York and Washington "insane" or "sick" is an injustice to its thousands of victims. Those words are much too soft and wimpy. Those are mushy words that beg for human understanding and even invite us to have an ounce of compassion for those who planned and executed this national nightmare.

No, the word is "evil" -- that dark interior force with which we are all somewhat familiar. But this evil was and will remain in remembered history as evil and diabolical in its hellish intensity.

At the moment we are unaware of just how many lives were consumed in explosive fuel oil and buried in stone and steel. New York's Mayor Rudolph Guiliani was correct when he said that the toll "will be more than we can bear." We do know, however, that more than 250 firefighters and police officers who rushed to the World Trade Center to save imperiled lives lost theirs in an avalanche of debris as the twin towers dissolved.

Until Tuesday, we Americans lived our lives in seemingly carefree security, protected by two vast oceans that left us with the false notion that we were invulnerable to the terrorism that plagues so many other nations. Not now -- and not ever again. We have been frightened to the core and we will never be the same. Our insouciance belongs to a now lost past.

President Bush spoke of America's resolve; the federal government's determination to discover who was responsible for this holocaust of lives. He assured the nation that justice demands retaliation. Few Americans would disagree. But before we do so, the government must be absolutely sure who these evil men are and that our military response is not disproportionate. To want justice is not to want other innocent people to die. We would fail the test of justice if America, enraged and frightened, became as wantonly evil as the terrorists themselves.

It is much too early to say who, precisely, was responsible. Osama bin Laden, the Saudi-born terrorist who has been eluding authorities for years in the mountains of Afghanistan, is, at present, the leading candidate. He has declared a terrorist war against the West in the name of a purified Islam. Christians, however, must realize that nothing in Islam or its scriptures, the Koran, justifies what happened in New York and Washington. To blame all Arabs or all Muslims would be unjustly identical to what our nation did to Japanese-American citizens on the West Coast during the Second World War when they imprisoned them. There is no such thing as "guilt by association." Islam, one of the three great monotheistic religions that traces its roots to the call of Abraham, is not responsible for the evil that has been committed in its name.

All commentators are repeating the refrain: "America will never be the same." To a degree, that is true. We will no longer take our safety for granted; we shall be looking over our shoulders with apprehension and we will have to surrender some of our blithe, naive confidence to more stringent security measures that in other nations have become routine.

What will not change, hopefully, is America's resolve to be an open, democratic society that trusts its future to an elected government, a nation that does not shrink from its international responsibilities and remains a beacon of hope for so many other people in the world.

Is America perfect? Are our dealings with the Arab nations evenhanded? Are we cultural imperialists? Are we rich at the expense of poorer nations? All these are legitimate questions. What America did not deserve and is now resolved to address in justice is the unspeakable evil that swept us all into an ocean of grief.

Evil must be named and confronted for what it is -- the opposite of a God Who is love.