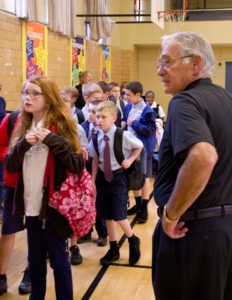 Father Peter Casey, pastor of St. Agatha Parish in Milton, watches as students of the parish school head off to their homerooms on the first day of school on Sept. 7. Most Catholic schools in the Archdiocese of Boston began classes this week. Pilot photo/Justin Bell

BRAINTREE -- The superintendent for the Catholic schools in the Archdiocese of Boston says that educators are lucky -- as they get two New Year's, one in January and one in September.

"There's great excitement, there's great energy, there's an electricity in the schools," said Mary Grassa O'Neill, who is also the secretary of education for the archdiocese.

O'Neill is assisted by two associate superintendents, three area superintendents and a handful of support staff. With 122 schools and 42,000 students, the Catholic school system of the Boston archdiocese is the second largest system in the commonwealth.

O'Neill said there are number of positive developments in here office and at Catholic schools in the archdiocese.

She said she is pleased that many of the 10 new principals this year have risen through the ranks of local Catholic schools. She said that children are the most important group in a school and that the teachers spend all their time with them. But, she said, the principal is the most important single person at school.

"All the research would show that unless you have a great principal, it's not possible to have a great school," said O'Neill.

"The children are excited, but they're still a little bit nervous and the parents are a little nervous, she said.

The Catholic Schools Office is expecting that preschool enrollment numbers will continue to increase for the second year in a row. Overall enrollment figures will not be available until October.

O'Neill said that when she and members of her team visit a school they look for three things: the school's Catholicity, its academic achievement, and its business or financial vitality.

"We're always looking for how Catholic are they, what are they doing for formation and spirituality and how they are bringing God to the children, and the children to God," said O'Neill.

For the next year, the office will be assisted Mary Corcoran, associate vice president for information technology assurance at Boston College. Corcoran is a 26 year veteran at the university and was recently in charge of end user support, resource computing, data security, and media technology services there.

Father William Leahy, the president of Boston College, has allowed Corcoran to serve the Catholic Schools Office without charge to the archdiocese.

She will be working part time with the office in advising their central IT needs, strategic planning for the school system, and identifying best practices of technology implementation. She said she will also be able to connect them to additional resources from Boston College.

"Father thought of me and asked me and I was absolutely delighted to have the chance to serve the archdiocese and Boston College in this way," said Corcoran. "I'm deeply committed to Catholic education."

"We are most grateful to Father Leahy for his generosity and steadfast commitment to Catholic education, and to assisting our archdiocese in this important work and mission. We are fortunate to have the opportunity to work with a senior educational leader such as Mary, as we work to assess and strategize future technological needs," said Walsh.