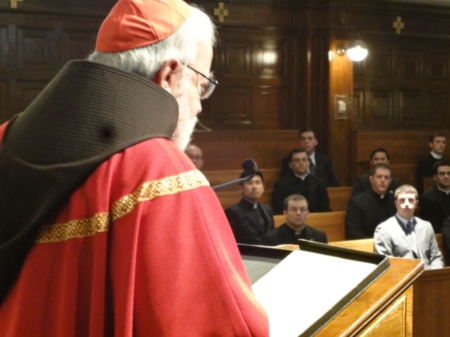 'On Wednesday (8/31), we celebrated the Mass of the Holy Spirit at St. John's Seminary for the beginning of the academic year there.' Pilot photo/CardinalSeansBlog.org

The last couple of weeks have been quite something for acts of God. Here in the East, on Tuesday of last week (8/23) we had the earthquake centered in Virginia, followed by Hurricane Irene, which moved up the coast last weekend (8/28).

In some ways, Irene was not as bad as people had feared, particularly in New York City where the mayor went to such lengths to assure the safety of the public. Still, it did terrible damage and cost people their property and even lives. Of course, tens of thousands were also left without electricity. Having lived through hurricanes in the West Indies, I am very conscious of just how powerful these storms can be and the devastating effect it can have on people's lives. In our own area, Vermont was the most seriously damaged. I'm always impressed at how people tend to be solicitous and generous in helping their neighbors during a time of crisis like this. I myself was affected by it because I happened to have a wedding in Washington D.C. on Saturday (8/27) and was planning to come back on Sunday, but there were no flights or trains that day.

I had wanted to get back as soon as possible because on Monday morning we were having Mass at Holy Name Parish in West Roxbury with the elementary school teachers and administrators of our Catholic schools. So, Bishop Robert Hennessey very generously agreed to take my place. He told them that he was the substitute teacher coming to say the Mass.

On Wednesday (8/31), we celebrated the Mass of the Holy Spirit at St. John's Seminary for the beginning of the academic year there. I talked on the Holy Father's message to the seminarians at the Santa Maria la Real de la Almudena during World Youth Day. In fact, some of our seminarians were actually in attendance there. The apse of the chapel at St. John's has been renovated this summer. This year we have around 70 seminarians altogether studying for the archdiocese, which makes us one of the larger contingents in the U.S. Of course, St. John's is filled and we have a new diocese, the Archdiocese of Hartford, coming on board beginning to send seminarians to study there. The Redemptorists have been sending some seminarians to study at St. John's, as well. I wanted to welcome the seminarians from other dioceses and other religious communities who are starting there at St. John's -- it's a great spirit in the house.

The rector, Bishop Arthur Kennedy, and the faculty were with us at the Mass, as well. I told them how grateful I am to them for making St. John's certainly one of the premiere seminaries in the country, and that we're very proud of them.

Later that day, we had our first meeting of the year for the Archdiocesan Pastoral Council here at the Pastoral Center. It was a very good turnout and we discussed a number of initiatives that the diocese is involved in, particularly pastoral planning and the conference on the Church's teaching on social justice. We talked about the Catholics Come Home program and how to continue those efforts of outreach and evangelization.