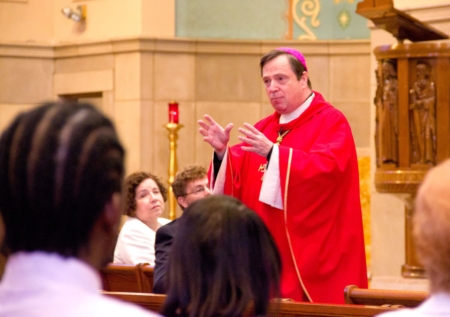 Bishop Robert Hennessey delivers his homily at the opening Mass for a day of development for Catholic school teachers and staffs Aug. 29 at Holy Name Parish in West Roxbury. Pilot photo/Justin Bell

WEST ROXBURY -- After being called in as a "substitute" for Cardinal Seán P. O'Malley, Bishop Robert F. Hennessey delivered his own lesson plan to the Catholic school teachers and staffs gathered at Holy Name Parish on Aug. 29.

The day was sponsored by the Catholic Schools Office of the Archdiocese of Boston. Around 300 teachers and administrators attended.

"I'm sure that I have the sympathy of every one of you here today. Have you ever gone to school on a morning that you thought was going to be a very easy day and have the principal say to you, the sixth grade teacher is not here today, you're the substitute teacher?" asked Bishop Hennessey in his homily of the Mass to open a development day for the staff of 15 Catholic elementary schools in the Boston area.

Because of a flight delay caused by Hurricane Irene, which affected the East Coast over the weekend, Cardinal O'Malley was unable to be present for the Monday morning Mass. Bishop Hennessey said the cardinal called him Sunday afternoon to tell him he would have to serve as "substitute teacher."

The regional bishop distilled his message into two lessons: Teachers are important and what one communicates to others is through what one believes.

He pointed to the Old and New Testaments showing the scriptural importance of teachers. He noted that St. Paul listed all the gifts that Jesus Christ gave to the Church and that teachers were toward the top of that list.

Bishop Hennessey also drew attention to the first eucharistic prayer of the Mass that calls for the congregation to pray for those who hold and teach the Catholic faith. He stressed the importance of not just teaching, but living out the faith as well.

He recalled his year as a second grader at St. Augustine school in South Boston where Sister Marie Patrick taught first Holy Communion to his class of 56 students. He said he did not remember her using a word like transubstantiation.

"But I'll tell you this: When I left the second grade with 55 of my classmates every one of us believed that Jesus Christ was present in the Eucharist. And the reason we believed was because Sister Marie Patrick believed. And she communicated that to us through everything that she said and did throughout the entire year," said Bishop Hennessey.

He said that teachers not only change lives for their students and for generations to come, but make an impact on the larger community of Catholics.

"You touch the life and heart of the Church. That's why we pray for you -- to hold and teach the Catholic faith that comes to us from the Apostles," Bishop Hennessey concluded.

Following the Mass, Mary Grassa O'Neill, secretary for education and superintendent of schools for the archdiocese, addressed the teachers and administrative staff before they went into workshops for different grade levels.

She spoke of a recent seminar she attended where the presenter said classrooms should be like pinball machines, meaning that children should continually see symbols -- posters, statues, pictures -- that remind them that they go to a special kind of school, one that is Catholic.

"You are the life and heart of the Church. You bring God to the children, and the children to God. It's not any more complicated than that," said O'Neill.

Most Catholic elementary schools in the archdiocese are scheduled to begin classes on Sept. 6.