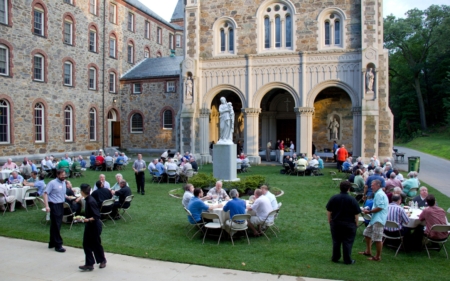 Priests enjoy a cookout in the courtyard of St. John's Seminary as part of the annual Vianney cookout. Pilot photo/Justin Bell

Under the patronage of the Cure of Ars, the patron saint of priests, around 100 priests of the Archdiocese of Boston gathered for the annual Vianney Cookout on Aug. 10.

The informal evening, held at St. John's seminary in Brighton, featured a talk given by Msgr. Peter Conley, evening prayer and a reflection led by Cardinal Seán P. O'Malley, and outside dining over brotherly conversation.

Events started shortly after 5 p.m. when Msgr. Conley, pastor of St. Jude Parish in Norfolk, gave a retrospective talk about his 47 years of priesthood.

After his ordination in 1964, he was assigned to St. Mary of the Annunciation in Melrose and quickly assigned to the Catholic Youth Organization (CYO). He said that he and his fellow priests responded to over 900 emergency calls to administer the sacraments that year. He also recalled having 21 meals a week prepared for him, and his laundry serviced.

The monsignors's reflection looked at differences in rectory life and the liturgy today, and included humorous and poignant anecdotes taking place decades earlier about Cardinal Cushing, other priests, and himself.

But he also remembered "great sorrows" that he experienced including many men leaving the priesthood in the late 1960s and the decline in the numbers of women religious.

Concluding, he spoke of the constants of priestly life: discipleship to the Lord, commitment to prayer, and the various expressions of love -- from a willingness to sacrifice and forgive, to showing that the term "nice guy" was never given to Jesus in the Gospels.

"Overall it's been a great ride," Msgr. Conley said.

Following the reflection, the priests gathered in the refectory at the seminary for evening prayer, as the chapel was undergoing some restorations.

Cardinal O'Malley gave some brief remarks during the prayer service.

The cardinal said that one of his favorite stories in the Acts of the Apostles takes place when Sts. Peter and John heal a crippled man who asked them for money. Later the two apostles are arrested, released, rearrested, and eventually flogged. The two then rejoiced in their sufferings.

"What allowed them to have that reaction to suffering? It was that the risen Lord was so real and so immediate and so present in their lives," said Cardinal O'Malley.

"And if we are going to be able to bear the cross of suffering and the hardships of ministry, we too must be aware of the Lord's love for us and his closeness to us. And the only way that we can have that awareness is if we are truly men of love and prayer."

"Because that awareness of his love, it will give us the joy and the strength to be able to carry the cross and to keep on loving and keep on praying," the cardinal concluded.

After the evening prayer, Cardinal O'Malley joined the priests for a catered dinner in the courtyard of the seminary.

"I always enjoy fraternal events like this; it's great to gather with my brother priests. It's great to spend this time gathering in prayer which strengthens us and then spending time, this fraternal relaxation getting to know my brothers better," said Father Carlos Suarez, who was ordained in May.

"I think he did a great service for us. I think that it's a real boost in the morale of the priest, to hear one of their own give such honest and realistic reflections, but reflections, too, that I think give us a great pride in who we are as priests of the Archdiocese of Boston," said Father Foley.