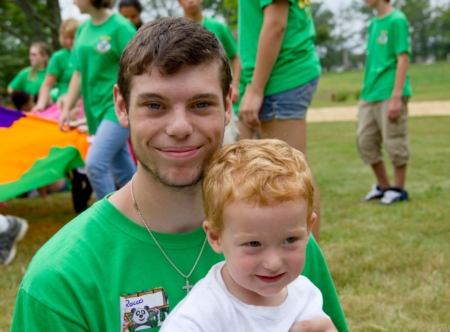 EAST BRIDGEWATER -- The basement rooms of St. John the Evangelist Church were transformed into a playful habitat for a cartoon panda bear -- and one that wanted to share God's love.

"We go over the top with decorations. I want them to walk into a different environment," said Nancy Smith, assistant director of religious education for St. John the Evangelist.

Smith did not want the 119 children who attended the vacation bible school at St. John's on July 25-29 to be reminded of CCD classes held there during the school year. So the rooms had streamers, paper foliage, a shelter, a bridge and a kiddie pool for the energetic panda bear whose message was: God is wild about you!

This was Smith's eighth year running the week at the parish. Smith -- who wore a hair band with panda ears the day The Pilot visited -- and her family, decorated the rooms over the course of two weeks. In addition to the children attendees, who ranged from preschool to 6th grade, there were 60 teens and preteens and 15 adults who volunteered with the school. The week concluded with a Mass and barbeque on Friday afternoon that was attended by families of the parish.

Each day had a different theme: God made you, God listens to you, God watches over you, God loves you no matter what, and God gives you good gifts.

Along with bible lessons, the attendees sang songs, and had plenty of "outside-time" during the camp that ran between 9 a.m.-noon each day.

Smith said that they real importance of the week is the relationships forged by the attendees and the older youth volunteers called "crew members." With the number of teen volunteers available, each preschooler had their own mentor for the week.

For the older campers, a volunteer would lead small group of four to five participants. Smith said that the children remember their mentors and recognize them at Mass at the church throughout the year.

Rocco D'Angelo, 18, a recent graduate of East Bridgewater High School and soon headed to the United States Navy, was assigned to watch over Joey Foley, 2.

"It feels really good to be a part of this guy's life for a week," said D'Angelo.

When asked about D'Angelo, Joey replied, "He's a gift."

Joey's mother, Amy Foley, said that her son would talk a lot about the vacation bible camp at home and understood the lessons taught there.

"I was amazed at what he understood at such a young age," said Amy Foley.

Missy Schrader's girls, Lucy and Grace, were enrolled in the camp.

"They talked to me more about one week of VBS than a full year of school and religious ed.," said Schrader.

Some of the teens who helped at the camp will also attend a leadership retreat on August 7-11 for juniors and seniors of the parish that will be held at the Craigville Conference Center on Cape Cod. The retreat has a select number of spots and teens are expected to become involved in parish life -- such as Eucharistic ministers, lector, or with CCD -- after attending, according to Lorraine Hopgood, director of religious education for the parish.

Ryan Mercier, 17, who was a crew member for the vacation bible school, attended the retreat last year and will return this summer. He said he learned much about himself and that he acknowledged that he treated some of his peers poorly. He said that his behavior was essentially a defense mechanism in response to his fear if others accepted him for who he was. He also found that others on the retreat had more challenging issues in their lives than he did.

"There's always someone who's got something way worse going on in their life," said Mercier.

For Father Wally Keymont, the pastor of St. John's, he said his parish is a not a financially wealthy one, but a place where "parents want their children to be."

Currently, the parish has a "Back to School Giving Tree" similar to Christmas trees in parishes designed to help families in need. This year's summer giving tree should help out 15-20 families with costs associated with their children returning to school, through gift certificates.

"Our treasure is not in our wallets, in it's in our children," said Father Keymont.