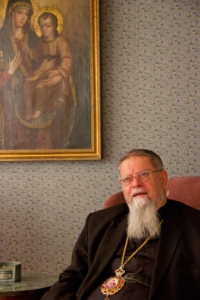 Archbishop Elias Chacour, the Melkite Catholic Archbishop of Akko, Haifa, Nazareth, and all Galilee, has been conducting visits along the East Coast, making presentations on the situation in the Holy Land and to raise funds for his efforts in his schools.

Among his stops were a July 24 presentation at St. Paul Parish in Cambridge and a July 28 visit to St. Basil's Seminary in Methuen, where he celebrated Mass and visited with local Melkite Catholics.

Born in 1939 in the village of Biriam in Galilee, Archbishop Chacour and his Palestinian Christian family were forcibly removed from their homes by Jewish authorities when he was 9 years old. Remaining in the region as refugees, the Chacour family became residents of the state of Israel when it was established in 1948.

In 1965, Archbishop Chacour was ordained a priest and assigned to a village called Ibillin. This post would last for over 40 years before he was named archbishop and moved to Haifa. Believing in the power of education, Archbishop Chacour has established a group of schools in Ibillin called the Mar Elias Educational Instiutions (MEEI). These schools have students from Christian, Muslim, Jewish and Druze faiths and span from the kindergarten to university level.

Archbishop Chacour is a noted figure in ecumenical and interfaith relations in the region. He established the first Israeli university open to Christians, Muslims, Druze and Jews and has been nominated for the Nobel Peace Prize three times.

The archbishop spoke with The Pilot following his July 28 Methuen visit.

Pilot: Could you describe the purpose of the visit, this time to the United States?

Archbishop Chacour: So, I come here not as a tourist, not to enjoy time, but to work. Every evening and every day I have one or two meetings with big crowds... And I share with them the story and I ask them to accept giving us their friendship and their solidarity, which means I invite them to choose either sides, Jews or Palestinians, but never to allow themselves to become one-sided for their choice. The other side deserves also their attention because the conflict (in the Holy Land) is not a conflict of right and wrong, it's a conflict of two rights that collude together.

On this visit, it sounds like it not only has been Catholic audiences, but other religious groups as well?

Archbishop Chacour: Well, I'm Catholic, I'm proud to be Catholic, but I'm proud to be Christian. So far, I have been in almost all denominations. Even I spoke in synagogues, and why not? In all these places, I don't see the "Christian", the "Catholic", the "reformed", the "not yet reformed." I see the human beings, who need to get good information about what's going on in that part of the world.

For our readers, can you update us on the situation for Christians in Israel, in your area? Is there still a lot of people emigrating out of the area? Is it still a very small minority?

Archbishop Chacour: Well, to update you about the situation on Christians in Israel is a very tricky thing. Whatever I say might be partial, and someone else can say "No, it's not true."

All I can tell you is part of the truth that I'm living. And the emigration, unfortunately, it's continuing. But we do everything we can to slow it down, if not to stop it.

Some years, like last year and this year, it has been stabilizing a little bit. How long that will go on all depends on what will happen around us in the Arab countries, to discourage people to stay or to encourage them to leave.

Your role in creating these schools is a method to try to keep Christians there. Is that right?

Archbishop Chacour: Well, the schools are a very small part of my job.

I am the Archbishop of Galilee. I am the archbishop of the largest Christian Church in Israel. We are over 60 percent of all the Christians -- all the different denominations. We are trying with all of our activities -- whether the schools, all the youth meetings, family meetings, group meetings -- to convince them that if they stay in Israel, it should not be for the land, for the political might, or for the economy; it should become because of the message they carry for Jews and Muslims. And to speak out clearly about the importance of forgiveness, and the importance of sharing, and the importance of making concession. When you are right -- not when you are not right -- you are powerful. That's how we pave the way towards reconciliation. When that will happen, I don't know, God knows.

Can you describe how it is to be from and to live in the area where Christ walked himself, in the area of Galilee?

Archbishop Chacour: First of all, I would invite you to go there, if you did not go so far. When you come back, you will never read the Bible the same way you used to read it. You will relate to places, to people, to events. The Bible becomes something more lively than to read the Gospel from faraway, as an abstraction, ideas, ideology. There is no ideology in the Gospel. There is an invitation to follow the man from Galilee.

Archbishop Chacour: I don't know whether they need to know. But since they are Americans and they reach the moon, it's time to reach their neighbors. And Christians in the Middle East who are, who have been threatened to disappear -- and many disappear like the Armenian Christians, like now the Iraqi church, after the American invasion to Iraq. I think that it's important for American Christians, if they believe in communion together, to start being concretely in communion with us.

And how do they do that? What's the best way for them to be in communion with Christians in the Holy Land?

Archbishop Chacour: There are many, many ways. First, to spread the news all around: That Palestinian Christians did not convert to Christianity from Islam, but the contrary is true. Most of the Palestinians converted from Christianity to Islam.

And then, many Catholic-Christians like to visit the Holy Land. It's a noble act. But they should go to the Holy Land. I don't mind if they go visit the Holy Sepulcher. It's nice, but they have to be aware when they enter this very small sepulcher, that there is something written on the marble. I know it's dark, they can't read it. I know it's covered with wax, it's not very clear. And it's written in a foreign language, Latin. But what it means is: He is not here. So if they declare officially he is not there, what are you going to do there then? Why don't you get out very quickly and go meet the Risen Lord in Galilee? And now in Galilee is there where the Christians are living, 150,000 Christians, not in Jerusalem, not anywhere else.

Archbishop Chacour: For Palestinians it is very simple: to be even handed, to be balanced. To be balanced, that's all we want. We want to love you Americans, we don't know how.

You're very astute in ecumenical relations, not only among Christians, but other religious groups too. What advice can you give to us Americans for our own efforts to reach out to others of different faiths?

Archbishop Chacour: Well, I think for myself, who I am to teach you what to do or what to be? I am not entitled; I am too small to tell you that. But for me as a Palestinian -- who lost his house, whose lands were confiscated, and was deported with the clothes he had on only, nothing else -- I can tell you very, very simply what helped me a lot is the fact that I never forgot that I was not born a Christian. I always remembered I was born a baby with a birth certificate. I was created in the image and the likeness of God.

When I see my Jewish neighbor who has been destroying my home, confiscated my land, persecuting me, I say "Goodness, don't forget he was born in the image and the likeness of God. What has he done to himself? What is he doing to you?"

Then I transport myself to Golgotha when Christ was on the cross. He could have damned those who crucified him, he could have cursed them to hell, but he then would have been no more Christ. He would have become a simple sinner, human being, who reacted to evil with some more evil. No he did not do that, he did not react. He continued acting, fulfilling the message for which he came.