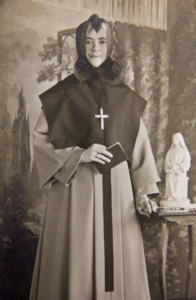 LEXINGTON -- The passing of Sister Alice Gagne on July 12 was not only a loss for her family, friends and fellow religious sisters, but marked the closing of a chapter in a family of strong Catholic faith that gave rise to five religious vocations.

Sister Alice of the Sisters of Charity of Montreal, commonly known as the Grey Nuns, was one of five biological sisters to join the religious order started by St. Marguerite d'Youville in 1737. She was also the last in her family of 13 to pass on.

Alice Gagne was born on Nov. 2, 1918 in St. Patrice, Quebec to Francois and Adeline Gagne. The family later moved to Woonsocket, R.I. for a better environment for daughter Germaine, who had severe asthma, and also for work opportunities for Francois.

Jeannette Deragon, the eldest grandchild of Francois and Adeline and only two years younger than her youngest aunt, Jackie, now deceased, grew up just a street away from her grandparent's apartment, where she would frequently visit and sleep over.

Speaking with The Pilot, Jeannette Deragon, 83, gave a glimpse into the life of the large multigenerational, French Canadian immigrant family and their daily routine.

Before most of the family would arise in the morning, Francois would wish his wife "good morning" and ask her how many potatoes she would need for the day. Sitting in a small armless rocking chair in the kitchen, he would peel the potatoes, while Adeline would prepare breakfast. Later when he was working at a dye and textile factory, Adeline tended to the many domestic duties. An accomplished seamstress, she would have her daughters point out dresses they liked in a catalog and Adeline would make replicas.

After Mass on Sundays, a popular family activity would be to caravan over to what was then called Lido Beach in Narragansett. They would park up to six cars in two rows, set up a tent and radios, and dance to Polka music. Instead of buying food at the beach, ragout and boiled potatoes, hamburgers, hot-dogs, and spaghetti and meatballs would be prepared. Sometimes the attendant working at the beach would even join the party, she said.

Deragon repeatedly described the family as happy, one in which the parents would never argue in front of their children. She also described them as musical and festive, with Francois frequently singing.

The Gagne family's Catholic faith was also an integral part of their lives. After supper each day, the Gagnes would go before a large crucifix in the apartment and pray the rosary.

It is unclear now when the Gagne sisters first encountered the Grey Nuns, who have a long history of ministry in hospitals, schools, and orphanages in New England, but their impact was apparent.

Five of the twelve Gagne daughters would join the order and another, Louise, sought to join but could not continue due to poor health.

Sister Claire was soft-spoken and peaceful; she worked in healthcare with children, and as a sacristan.

Sister Germaine was a talented seamstress and made the sister's habits.

Sister Gilberte served as a driver for the congregation, shuttling sisters between hospitals and residences. Known for her sense of humor, Sister Gilberte also took lessons at a Fannie Farmer cooking school.

Sister Henrietta took courses in pastoral care and was talented particularly in meeting with people one-on-one and with those nearing the end of their lives.

Tragedy met the Gagne sisters in the form of an arsonist's fire that destroyed a house that some Grey Nuns were renting in Lawrence in the early 1970s.

Sisters Gilberte and Henrietta were both badly burned, with Sister Gilberte spending a year in an Ohio burn center enduring multiple plastic surgeries on her face. Both women lost all their personal possessions in the fire, but both continued their ministries after recovering.

Sister June knew all five of the Gagne sisters and said they kept in contact with each other while being assigned to different locations by the order.

"You know when people have a good relationship with God they have kind of a peaceful inner-spirit? And they all had that kind of a spirit," said Sister June.

"All five of them were very prayerful -- all different personalities -- but prayerful women, and all women of strength. No matter what happened in their lives, they were able to walk through it. And part of that was because they supported each other."

For her part, Sister Alice entered the community in 1938 after a period of training to be a nurse in Cambridge. Much of her ministry with the Grey Nuns took place in orphanages run by the sisters in Worcester and Nashua, N.H. She took special care of the girls under her charge, treating them as if they were her own.

In 1979, her ministry took a different tack when she was asked to assist with the elderly at a nursing home in Dyersburg, Tenn.

Sister June recalled that Sister Alice was initially hesitant, but agreed to go, and did well.

Yet, she was also able to continue working with children, bringing toys to the children waiting in the lobby of a local office of the Women, Infants and Children (WIC) nutrition program. When she wasn't there with other Grey Nuns, the children would ask for her.

"Well, you know, it's not that much different," said Sister June recalling something Sister Alice once told her. "She said the children run around, the old folks don't run around, but they still need me to sit there and just talk to them."

Sister Alice returned to New England in the mid 1980s and worked at other Grey Nun facilities, including St. Mary's Health System in Lewiston, Maine. Her French-English bi-lingual ability suited her well in escorting the elderly to the destinations in the hospital.

In 2006, she officially retired and moved to Youville Place in Lexington, a former residence for the Grey Nuns converted to an assisted living facility. There she continued to impact the lives of those around her.

Sister Alice died on July 12 at a nursing home in Waltham, admitted only a week earlier, at the age of 92.

At the wake preceding the July 15 funeral Mass, a copy of the constitution of the order, a crucifix, and a red rose were placed on the lower, closed half of the casket, in keeping with Grey Nun tradition. The constitution is to signify the Sisters' way of life, the cross reflects the reality of life's burdens, and the rose represents service performed with love. Sisters and friends then shared memories about Sister Alice.