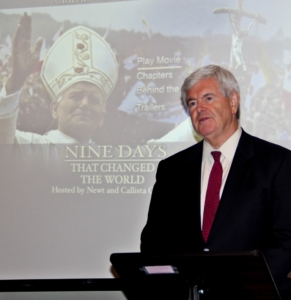 The film titled "Nine Days that Changed the World" was shown to a private audience in Lexington of over 100 as a fundraiser for the organization which encourages and educates lay Massachusetts Catholics to become involved with civic life.

"It's just a tremendous opportunity for lay Catholics in Massachusetts to learn about this incredible story about one man who brought his faith to the public square and because of that changed the course of history," said Victor Pap, marketing and development director for Catholic Citizenship.

Pap who saw the documentary for the first time at the event called it "riveting."

"It was definitely emotional and I plan to watch it again, hopefully with my parish and some of the folks in my men's group," said Pap.

Pap and his associates had helped the Gingrichs raise awareness about the documentary project and connect them to benefactors in Massachusetts two years ago. In turn, the couple came to Boston in order to raise awareness of the film and support the non-profit organization.

According to their website, Catholic Citizenship is a 501c(3) organization that is in agreement with the Massachusetts Catholic Conference (MCC), the policy arm of the bishops of Massachusetts and also "faithful to the Teaching Authority of the Roman Catholic Church and is loyal to His Holiness, Pope Benedict XVI."

The documentary showcases the historic nine-day visit of the recently elected Blessed Pope John Paul II to his homeland of Poland, in June of 1979. It also gives a historical context of his life before and after the trip, along with the wider political implications.

Newt Gingrich, a recent convert to the Catholic faith, and Callista Gingrich, a Polish-American long involved with the Church, became interested in the pope's visit to Poland when making a previous documentary on Ronald Reagan.

"This is something that we felt we wanted to learn more about and share in a documentary," said Callista Gingrich.

The film features archival footage of the pontiff's visit, and commentary from heavyweights like papal biographer George Weigel, Jerzy Kluger, the childhood friend of Wojtyla, and Walesa who was also the famous shipyard worker who became the leader of the Solidary movement in Poland.

Currently the film has a Polish language edition with plans for a Spanish version and possibly one in Chinese.

"We would love to have it seen all over the world and we're trying to do everything we can," said Newt.

"Nine Days that Changed the World" will be shown at World Youth Day on August 17th and recently was one of three finalists in a Vatican film festival held in May.

"I think the documentary is a pretty bold depiction of a piece of Pope John Paul II who will be the great one and his fearless proclamation of the Gospel in imitation of Christ," said attendee Alexis Walkenstein.

"It shows the dynamic of the political time; where to go and preach the Gospel as the Vicar of Christ on earth, he set people free," she also said.