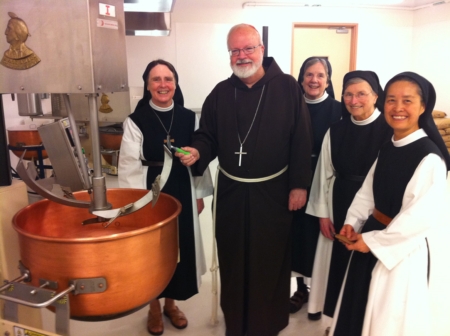 'I paid a visit to the Trappistine Sisters of Mount Saint Mary's Abbey in Wrentham.... They gave me a tour of their new candy factory and I blessed it for them.' Pilot photo/CardinalSeansBlog.org

This week (7/20) I was very sad to hear of the passing of Myra Kraft. Myra was a strong advocate for serving the less fortunate and, together with her husband Robert, they have been great supporters of worthy organizations like Catholic Charities. Her dedication and commitment to serving those in need and her willingness to enlist others in that important work will be greatly missed. We ask God to provide comfort to Robert and their family during their time of sorrow. We pray for Myra and give thanks for her life. May her memory be for a blessing.

Later that day (7/16), Bishop Arthur Kennedy, Father Jack Ahern and I had lunch with Archbishop Cyril Bustros of the Melkite Greek Catholic Church. Archbishop Bustros has been the Archbishop of the Melkites in the United States until his election by the Greek Melkite Synod and appointment by the Holy Father as the new Archbishop of Beirut. While Boston is the local See for the Roman Catholic Archdiocese, the Eparchy of Newton is the See for the Melkite diocese. We had a little farewell lunch for him at their headquarters at Annunciation Cathedral in Roslindale.

The newly appointed bishop for the Melkites here will be Bishop Nicholas Samra, who will be installed in the next few weeks. We are grateful for Archbishop Bustro's service and he's always been very close to the archdiocese. We know that being the Archbishop of Beirut will be a challenging task and we pledge our prayers and support to him as he begins his new ministry there. Also at the lunch we learned that Father Robert Rabbat, who is the rector of the cathedral, has also been named the bishop of the Eparchy of St. Michael of Sydney, Australia.

On Sunday morning (7/17), I paid a visit to the Trappistine Sisters of Mount Saint Mary's Abbey in Wrentham. I celebrated Mass for the sisters and then afterwards we had a breakfast and we had a dialogue. They have a large community, it looked like there were about 50 sisters there, I think with three novices and three postulants. They gave me a tour of their new candy factory and I blessed it for them. They also showed me their new gift shop/bookstore that they will be opening. Father Kevin Hunt their chaplain was with us; he's a Trappist monk from St. Joseph's Abbey, who lives in Wrentham. The sisters have just built a large new building to expand their candy business. In the Cistercian tradition, they are to support themselves by their work. So, traditionally, the abbeys and monasteries were on large farms or they made such things as beer, jelly or vestments. The sisters in Wrentham make chocolate -- and wonderful chocolate at that! It is such a blessing for us in the archdiocese that we have five communities of contemplative sisters: two of the Poor Clares, two of the Carmelites, and the Trappistines. The Trappistine community, being the largest, therefore has the greatest financial need and the way they address it is by making their chocolate.

If you can't make it to Wrentham and you would like to taste some their wonderful confections yourself, you can even order them online. In this way, you can also support their community life. I encourage you to try them. You won't be disappointed!