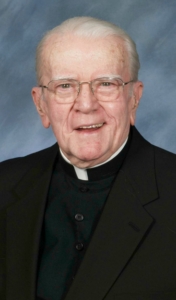 Central Regional Bishop Robert Hennessey was the principal celebrant of the funeral Mass for Father John F. Burns on July 15 at St. Jude Church in Waltham. Father Burns died at Regina Cleri on July 9, he was 89 years old.

A native of Boston where he was born on May 22, 1922, one of the three sons of the late John and Winifred (Frazer) Burns, he was an alumnus of the Class of 1943 of the College of the Holy Cross and of St. John's Seminary, Class of 1948. Archbishop Richard Cushing ordained him to the priesthood at Holy Cross Cathedral on May 6, 1948.

Following ordination, he served a brief summer assignment in our southern neighboring diocese of Fall River where he was an assistant at St. Kilian in New Bedford. His first assignment in the archdiocese was as an assistant at Our Lady Comforter of the Afflicted Parish in Waltham where he served from 1948 to 1951 when he was named chaplain at House of the Angel Guardian in West Newbury. He returned to parish life as an assistant at St. Margaret Parish, Lowell from 1953 to 1959. For six months in 1959 he went to Hildesheim, Germany to brush up on his German and on return to the archdiocese was named an assistant in a series of parishes: St. Joseph, East Boston (1959-1962); St. Ann, Somerville (1962-1963); St. Patrick Roxbury (1963-1966); St. Joseph, Quincy (1966-1967); St. John the Evangelist, Canton (1967-1973). He also served briefly at St. Ann Parish in Kingston, Jamaica.

Humberto Cardinal Medeiros named him pastor of St. Adelaide Parish in Peabody on Nov. 20, 1973. He was named parochial vicar at Our Lady Help of Christians Parish in Newton in 1979 and was granted senior priest retirement status in 1987 wherein he became senior priest in residence at St. Charles Borromeo, Waltham.

Father Joseph Scorzello was the homilist at the funeral Mass and among the concelebrants were Father Gerard Brennan and Joseph Kane, both of Regina Cleri, Boston and Father Kevin Toomey, pastor of St. Raphael Parish, Medford. Following the Mass, Father Burns was buried in St. Joseph Cemetery, West Roxbury. He leaves no immediate survivors.