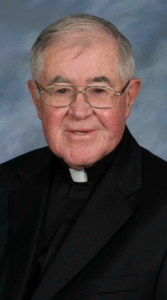 He had been senior priest in residence at Gate of Heaven and St. Brigid parishes since 1998 when he retired from service as pastor at St. Thomas the Apostle parish which straddles Peabody and Salem. Most of the time you forgot he was a senior priest or that he was "in residence". Father Daniel Sheehan's constant presence at both parishes and in the South Boston community gave you the impression he was a full-time associate at the parishes.

When he died rather unexpectedly at Mass General on July 2, news of his death spread quickly through the two parishes and among the priests of the archdiocese. Greatly affected was Father Bob Casey, pastor of both parishes, who lamented "I'm not sure what I'll do without him." Not only was Father Sheehan regularly available for sacramental ministry, he supported Father Casey in many ways, including advice from his own experience and his teaching Spanish at South Boston Catholic Academy. Father Paul Rouse another senior priest at the two parishes was equally surprised and saddened by the news. "He was great to have in the house and in the parish." A more recent arrival Daniel Goeller, a seminarian from the venerable diocese of Fulda in Germany, who is living at South Boston for the summer, was visibly shaken, clearly having come to know and like the other Dan, if in a short time.

Born in the western Massachusetts town of Montague on May 30, 1928 he was the only child of the late Daniel and Mary (Lawlor) Sheehan. He grew up in Danvers, attended local schools, and graduated from St. John's Prep before entering the archdiocesan seminaries. Archbishop Richard Cushing ordained him to the priesthood at Holy Cross Cathedral on Sept. 29, 1953. Following ordination he was named an associate at St. Paul Parish, Hingham.

Responding to the call of Richard Cardinal Cushing for volunteers for his newly founded missionary society of diocesan priests, the Missionary Society of St. James the Apostle, Father Sheehan was a member of the original band of society members. He served for six years in Peru and for one year as the assistant director of the Society living at Holy Cross Cathedral rectory.

He returned to the north shore as pastor of St. Thomas the Apostle on April 25, 1985 and remained at the parish until his retirement on June 1, 1998.

An avid fan of the local pro sports teams he pored over the sports pages of the daily papers for the reports, having taken in the game -- usually in full -- the day or evening prior.

Each week, usually on Friday, Fathers Bill Pearsall and Louis Bourgeois would pick Dan up at St. Brigid rectory and they would spend the day walking Castle Island, grabbing dinner and telling stories or as Dan might "telling lies to each other."

Central Regional Bishop Robert Hennessey, himself a former St. James Society member, was the principal celebrant of Father Sheehan's Funeral Mass at St. Brigid Church on July 7. The bishop reported 57 concelebrants -- one for each year of Dan's priesthood. Among those were archdiocesan vicar general, Father Richard Erikson; Father Thomas Foley, archdiocesan vicar for parish life and leadership; Father John Culloty, pastor, St. Timothy, Norwood and the homilist of the Mass; long time friends Fathers Bill Pearsall and Louis Bourgeois; Father George Emerson, St. Timothy, Norwood; Father Paul Rouse, senior priest, South Boston; and Fathers James Curtin and James McCune, senior priests, Regina Cleri. The church was filled with friends both new and old, and both young and old. Father Casey observed "We wanted to give him a good send off -- first class. And we did. He deserved it." The attendance of priests and people confirmed Father Casey's comment.

Following the Funeral Mass Father Sheehan was buried in St. Mary of the Annunciation Cemetery, Danvers.