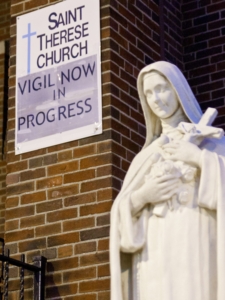 A sign outside St. Therese Church in Everett announces the vigil protesting the closure of the parish in this 2005 file photo. On June 14, Cardinal O'Malley announced that the church will be reused as an oratory for the Brazilian community of St. Anthony of Padua Parish. Pilot file photo/ Gregory L. Tracy

BRAINTREE -- After receiving feedback from former parishioners and other local Catholics, Cardinal Seán P. O'Malley has decided on the status of eight church buildings related to parishes that had appealed their closure to the Vatican.

Six of the churches will be "relegated to profane use" and another two will continue to function as places of Catholic worship, but will not be reopened as parishes.

St. James the Great in Wellesley, St. Jeanne d'Arc in Lowell, Star of the Sea in Quincy, Our Lady of Lourdes in Revere, St. Frances X. Cabrini in Scituate, and Our Lady of Mount Carmel in East Boston will be relegated to profane use, meaning the church buildings can be used for something other than Catholic worship through sale or development by the archdiocese.

St. Therese in Everett will become an oratory serving the Brazilian community of St. Anthony of Padua Parish. In Church parlance, an oratory is a sacred place that can hold Mass and other liturgies for a particular group, but does not have the capacity or responsibility of a parish.

St. Jeremiah's in Framingham will continue as a worship site for the Syro-Malabar Eastern rite of the Catholic Church, which has its origins in India. An agreement to sell the church to the St. Thomas Syro-Malabar Catholic Diocese is in its final stages.

The use of a former church building sold by the archdiocese would be "appropriate and dignified" but could not be for a "sordid use," one that is immoral or offensive to Catholics. Sacred items from the relegated churches will be removed and catalogued for use by other Catholic churches; with a priority given to neighboring or "welcoming parishes" that have received former parishioners from the closed churches. Memorials will be created at the welcoming parishes designed to preserve the memory of the former parishes.

The archdiocese said monies received from the sale of church buildings will be earmarked for an archdiocese fund designated for the direct help of parishes.

The decision was announced on July 14 and will take effect on Monday, July 18. It follows months of a multi-faceted study seeking input on a variety of levels about the question of changing the status of the church buildings.

"The consultation process was very important and of great assistance to me in making decisions on each of these properties... I know how difficult the parish closings were, especially for those parishioners directly impacted. I want you to know I have heard you. I appreciate your strong commitment to your parish," said Cardinal O'Malley in the statement announcing the decision.

Citing dwindling Mass attendance, financial problems, and a clergy shortage, the archdiocese suppressed, or dissolved, 57 parishes between 2003 and 2005 in a process known as Reconfiguration. Though the legal entities known as parishes were dissolved, their church buildings and related properties remained.

Father Arthur Coyle, Episcopal Vicar of the Merrimack Region was among those involved with the study that addressed the future of each closed church. According to Canon Law, the spiritual good of the faithful cannot be harmed when relegating a church, and there must also be grave reasons for the relegation.

The archdiocese found adequate spiritual and pastoral care for parishioners affected by these parish closings.

They examined if there were alternative worship sites within a roughly five mile radius of each closed church. The archdiocese also spoke with pastors of welcoming parishes and found that "many of the people have become very much involved in the life of their new parishes," Father Coyle said.

When identifying grave reasons, the archdiocese examined a variety of data: a survey of area Catholics, feedback from visits to welcoming parishes, a financial analysis of maintaining properties, available clergy resources, and alternative sources of funding.

There were also approximately 450 online and written responses to the survey put out to the public in February asking for input on the future of the churches. According to the archdiocese, the results were mixed between those asking that the churches be reopened and remain closed.

Each church building was given an extensive physical review projecting costs 20 years into the future. Father Coyle said that during the consultations the potential costs of keeping the buildings functioning were a surprise to many, including former parishioners now at welcoming parishes. A welcoming parish would have been required to absorb the costs of maintaining and preserving any reopened church buildings. Those cost had been previously paid for by the archdiocese.

The analysis by the archdiocese concluded that there were grave reasons sufficient to relegate the six churches. They found that by retaining the buildings, it would actually be detrimental to the care of the faithful, as it would draw funds away from existing local parish sources.

Inadequate clergy and lay minister support, along with the comparative small size of the groups wanting to keep the buildings open, were also listed as grave reasons in support of relegation.

As required by Canon Law, Cardinal O'Malley sought the input from the Archdiocesan Presbyteral Council before making his decision. The council had been given the findings of the broad study.

"What I have heard from these consultations is that we have reached a point as a community of believers where we must relegate these church buildings as part of the continuing healing and rebuilding of the archdiocese. I continue to put my trust and faith in our Lord Jesus Christ to help us come together as a Catholic family, inspired by the Holy Spirit and guided in our principles and commitment to go God's work," said Cardinal O'Malley the statement.

Members from seven of the former parishes had appealed the suppressions to the Vatican, in some cases with the extraordinary step of making a final appeal directly to Pope Benedict XVI. Five of the churches -- St. James, St. Therese, St. Frances X. Cabrini, Our Lady of Mount Carmel and St. Jeremiah -- have members keeping vigil in order to prevent the buildings from being shuttered by the archdiocese.

Early on, Cardinal O'Malley committed to allowing the civil and canonical appeals to be exhausted before deciding the fate of the buildings.

However, late last year the Holy Father refused to intervene in the decision of the regular Vatican judicial process, which stood by the Archdiocese of Boston's move to suppress the parishes, effectively ending the process.

Members of the relegated churches could, however, appeal again to the Vatican regarding the Cardinal's latest decision on the buildings.

The archdiocese did not set a timetable for ending the vigils and closing the buildings.

Father Coyle said that there has been "continued outreach" from the regional bishops and other archdiocesan personnel to those involved with the vigils.

"We continue to be in dialogue with them. Reminding them that the Cardinal was patient for the six years of the appeals, now asking them, imploring them, to move on as many of their fellow parishioners did," said Father Coyle.