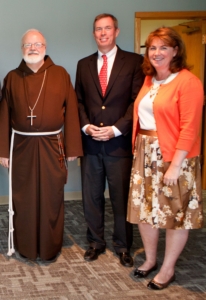 "(On June 21), I met with a wonderful group of people who have been working on the preparations of the Clergy Funds dinner. At the reception I was happy to have a chance to speak to Doug and Joanie Kingsley who are co-chairs of the dinner." Pilot photo/Gregory L. Tracy

(On June 21), I met with a wonderful group of people who have been working on the preparations of the Clergy Funds dinner.

This is one of the newest but largest fundraising events of the year, which we will be having in September. The dinner supports our fund for senior priests that provides support for them after a life devoted to serving God's people.

We had Mass and, afterwards, a reception.

At the reception I was happy to have a chance to speak to Doug and Joanie Kingsley who are co-chairs of the dinner. They were there with three of their four sons: Max, Scott, and Doug. I am very grateful for the work of the entire group who are working on behalf of our senior priests.

(On June 22), we attended the annual Order of Malta dinner for senior priests at the Boston College Club. Jack Joyce and Jim O'Connor of the Knights have organized this wonderful meal for our senior priests. They always bring in bagpipes and Bob Crane and the Treasury Notes sing all the oldies but goodies.

The BC Club has a spectacular view of the city of Boston. Many of our priests have studied at Boston College of course, so it's a very grand event for them.

A couple of our priests added their voices to the Treasury Notes including Father Richard Fitzgerald pastor of St. Paul's in Wellesley. The closing prayer was led by Msgr. Paul McManus who is celebrating the 75th anniversary of his graduation from BC! He has been a priest for 69 years, ordained in 1942.

On Saturday (June 23), I attended the Family Conference which was organized by the Office of Ethnic Ministries. It took place on the grounds of Malden Catholic High School with representatives from the various ethnic groups from Asia, Africa, Latin America and Europe who make up our local Catholic community. It was a magnificent event.

There were many priests from the Cape Verdean, Brazilian, Haitian, Vietnamese, Korean and Chinese apostolates who were all part of this very extraordinary manifestation of the catholicity of the Church and of our local Catholic Church in Boston.

The event gave us an opportunity to publicly acknowledge the priests who are working in our ethnic apostolates and who come from all these various countries. Without their invaluable ministry we would not be able to serve these growing immigrant communities in the archdiocese.

On Sunday evening, I participated at the Cardinal's Leadership Circle gathering at the home of Rich and Helene Monaghan in Hingham.

It was a great gathering of people who are friends and benefactors of the archdiocese.

I spoke about the training programs for the seminarians, the deacons and the lay ministers. On the same day the Globe had an article about Sister Olga, so I also referred to that article during my remarks.

Father Hehir spoke about Campus Ministry and reaching out to our youth and young adults.

Rich Monaghan echoed Father Hehir's words on the importance of communicating and engaging our young people. He also thanked and encouraged all to support our works.

I am always happy to express appreciation and share our initiatives with our friends and supporters.