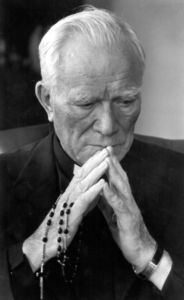 A possible medical miracle attributed to the intercession of Holy Cross Father Patrick Peyton, pictured in an undated photo, could advance his sainthood cause. The "rosary priest," as he was called, was well known for coining these phrases: "The family that prays together, stays together," and "A country without prayer is a country without peace." (CNS photo/Family Theater Productions)

The priest, whose popular radio and television programs promoted family prayer, was known for coining the phrases "The family that prays together, stays together" and "A world at prayer is a world at peace."

Father Peyton emigrated from Ireland to the United States in 1928 when he was 19. He was ordained to the priesthood in 1941 and founded Family Rosary in Albany the following year. He conducted rosary crusades in 40 countries, drawing 28 million people.

Father Peyton died in 1992 and the cause for his canonization was opened 10 years ago.

The tribunal in the Albany Diocese was appointed at the request of the postulator of the cause, Andrea Ambrosi. Bishop Hubbard conducted "a thorough review of all aspects of this possible healing," according to a statement from Holy Cross Ministries, which was founded by Father Peyton.

The findings have been closed and will be sent to the Vatican Congregation for Saints' Causes.

"While the details of the possible miracle cannot be shared at this point in the process, we can share with you that a man in his 60s was admitted to the hospital with life-threatening, multiple organ failure. His family prayed to Father Peyton and they strongly felt that he was healed through intercessory prayer. The medical community has offered information to support this belief," said Holy Cross Father John Phalen, president of Holy Cross Family Ministries.

"We hear from people around the world frequently, who believe they were healed by Father Peyton. Many others simply share stories of being touched by his holiness. While they may already consider him a saint, we are all pleased to see progress in his cause," added Father Phalen.

In the church's process leading to canonization, the first step is the declaration of a person's heroic virtues, after which the church gives him or her the title venerable. In general, the church must then confirm two miracles before sainthood is declared. The first miracle is needed for beatification and the second for canonization.

Father Peyton founded Family Theater Productions in Hollywood in 1947. Through it he produced more than 600 radio and television programs that featured hundreds of movie stars and celebrities, and had more than 10,000 broadcasts.

The investigation into the priest's cause for sainthood opened in June 2001 in the Diocese of Fall River, Mass., and was moved from that diocese to the Baltimore Archdiocese by the Vatican. In July 2010, the archdiocese completed an exhaustive investigation into Father Peyton's life and ministry, and archdiocesan officials sent copies of its 16,000-page report to the Vatican's Congregation for Saints' Causes by July 23.

Holy Cross Family Ministries recently announced it has launched a new website about the priest's cause, www.FatherPeyton.org.