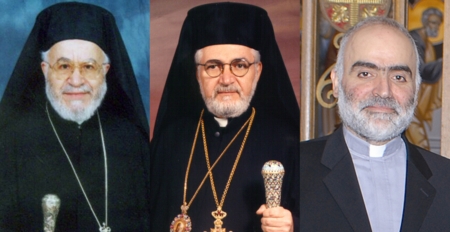 On June 15 the Press Office of the Holy See announced that the Holy Father, Pope Benedict XVI had made several changes in the hierarchy of the Melkite Catholic Church. A few of those changes affect our friends and fellow Catholics of the Melkite Eparchy (diocese) of Newton.

The current bishop of the eparchy, Archbishop Cyrille Bustros, MSP has been chosen metropolitan archbishop of Beirut and Jbeil of the Melkites in Lebanon. He was chosen for his position by the Melkite Synod assembled in Lebanon and the Holy Father gave his consent to this choice. The archbishop will be returning to his native land after having served as Eparch of Newton since 2004. The Melkite diocese covers the entire United States.

The Holy Father has also nominated a successor to Archbishop Bustros. The one time auxiliary of the eparchy (1989-2005), Bishop Nicholas J. Samra will be the new eparch. A native of Paterson, N.J., his college and seminary education were in this area; he attended St. Anselm College, in Manchester, N.H., St. Basil Seminary in Methuen and St. John's Seminary, Brighton prior to his ordination to the priesthood on May 10, 1970. For the next two decades he served in various parish and diocesan assignments in the eparchy. He was ordained titular bishop of Gerasa and auxiliary of the Newton eparchy on July 6, 1989. The Holy Father accepted his request to retire as auxiliary in 2005. In the intervening years he has served in Melkite parishes across the country while maintaining his residence in Warren, Mich. He has also carried out catechetical and formation programs for Eastern Catholics as well as collaborated on projects within the United States Conference of Catholic Bishops involving the Eastern Catholic Churches of the USA.

The pope also named the present rector of the Melkite Cathedral of the Annunciation in West Roxbury, Archimandrite Robert Rabbat as the new eparch of St. Michael of Sydney, the Melkite diocese that serves both the continent of Australia and neighboring island nation of New Zealand. The eparch-elect was born in Lebanon in 1960 and has a bachelor's degree in engineering and mathematics from Ohio State. He completed seminary studies in Lebanon prior to his 1994 ordination as a priest of the Newton eparchy. On his return to the United States he served at St. Michael the Archangel in Hammond, Ind. for 10 years, during which time he earned a masters degree in communications at Purdue University. He assumed editorial responsibility for the eparchial journal "Sophia" in 1999 and was named rector of the cathedral in 2005.