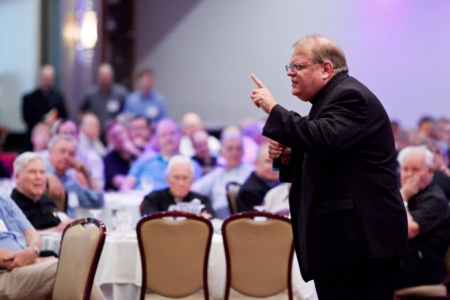 RANDOLPH -- Over 300 hundred priests of the Archdiocese of Boston -- from Msgr. Paul J. McManus, 95, to the newly ordained Father Mark Murphy, 26 -- gathered on June 9 at Lombardo's in Randolph for a day of fellowship, instruction and prayer.

The day-long 2011 Presbyteral Convocation centered on the upcoming changes in the English translation of the Roman Missal, the most significant change to the English Mass since the reforms of the Second Vatican Council were first implemented.

Throughout the course of the day, renowned Vatican liturgist, St. John's Seminary instructor, and priest of the diocese of Worcester, Msgr. James Moroney presented a three-part conference on upcoming missal changes.

Cardinal O'Malley, who was present throughout the day, participated in a question and answer session about the Mass changes, along with Msgr. Moroney. The cardinal also addressed the priests during evening prayer.

Msgr. William Fay, co-chair of the Archdiocesan Pastoral Planning Commission updated the priests on the group's work for the archdiocese.

The convocation concluded with a social hour and dinner.

In the first segment of the presentation, Msgr. Moroney focused on the identity of the priest at Mass.

Msgr. Moroney said the popular "roles" the congregation expects the priest to fulfill during the Mass include orchestra leader, politician, talk show host, entertainer, and magician. While he noted that there may be some elements of these in the priests' ministry, ultimately the priest is acting "In Persona Christi" ("In the Person of Christ").

"The function of the priest at Mass is to become more and more like Christ upon the altar of the cross, to be conformed to the person of Christ from the inside out. It's what priesthood is all about," Moroney said.

Expanding on the idea of the priest conveying Christ's living presence, Moroney recalled as a young child asking his pastor to pray for his sick dog.

"I was so convinced, just by the way he moved and by the way he talked, that he was an old friend of Jesus, and that Jesus would listen to him, and make Trixie better," he said. "He had so conformed himself to Christ from the inside out."

In his second segment, Msgr. Moroney highlighted translation history and theory and shared that the Catholic Church is the only Christian church that "prays the same prayers in every language and every place throughout the entire world."

He explained that in this latest revision of the English translation from the original Latin, a technique called formal equivalency was used. The approach draws on the expertise of various theologians, pastors, liturgists, specialists in English literature, poets and musicians, with a priority to maintain the beauty and accuracy of the original text.

Referring to the beauty of the ancient prayers of the Church he said, "These have been hanging around for 1,500 years. We've preserved them. They are the same prayers that nourished the faith of little Tommy Aquinas."

At the opening of his last segment, while reading an ornate passage on the role of the homilist, Msgr. Moroney played a video for British comedian Rowan Atkinson's character Mr. Bean trying his hardest to stay awake during a church sermon. The cardinal and priests alike laughed heartily at the British comic's physical antics.

Msgr. Moroney contrasted this scene with St. Augustine's words about his mother, St. Monica, and her desire to hear the Lord through his homilies, and that the Lord would hear her prayers.

"What you do as a homilist is to weave together the sacred liturgy, the sacred Scriptures, and the life of the people of God," Msgr. Moroney said.

During the question and answer session that combined common queries and comments, Cardinal O'Malley responded to skepticism about the upcoming Mass changes with a statement of encouragement.

The cardinal recounted his own experience of learning the Mass in Latin as a seminarian and then adapting to using Spanish and English as a priest and a bishop. He called this process "challenging." At the same time, he said, the new changes present an opportunity to reach out to the faithful and bring them closer to their faith.

"I see this as being something that is in tandem with our other efforts at evangelization. It's an opportunity to reintroduce people to the centrality of the divine mysteries," the cardinal said.

Father Seán Hurley, 31, ordained last month, said he enjoyed getting to know the faces of many of the priests, as he did not grow up in the Archdiocese of Boston.

"I'm telling them all, thank you for letting us join the team," he said.

"I really feel like it's a gift and a blessing to work along side these men, these servants of the Lord," said Father Hurley.

Msgr. McManus, of ordination class of 1942, said that Msgr. Moroney's presentation was "excellent."

A number of changes to the liturgy have taken place in the nearly seven decades of Msgr. McManus's priestly ministry.

He reflected on the upcoming Mass changes as well as the changes to the liturgy following the Second Vatican Council, particularly the switch from Latin to the vernacular.

"That was a tremendous change and a welcome change, actually. I'm sure this will be a splendid thing too," said Msgr. McManus.