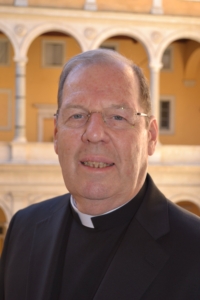 Rev. Monsignor Robert P. Deeley has been appointed June 14 next Vicar General and Moderator of the Curia for the Archdiocese of Boston effective September 1, 2011. (Pilot photo)

Braintree, MA -- Cardinal Seán P. O'Malley announced today that Rev. Monsignor Robert P. Deeley has been appointed Vicar General and Moderator of the Curia for the Archdiocese of Boston, effective September 1, 2011. Since 2004 Msgr. Deeley has been assigned to the Vatican in the office of the Congregation for the Doctrine of the Faith. He succeeds the Very Reverend Richard M. Erikson who will participate in the Institute for Continuing Theological Education of the Pontifical North American College beginning in September.

Cardinal Seán said, "Monsignor Deeley is a well respected and accomplished priest who has served the Church with distinction in the Archdiocese of Boston and in recent years in Rome. We look forward to the many contributions he will provide to our ongoing efforts of strengthening and renewing the Archdiocese. At this time I wish to express my gratitude to Fr. Erikson for the time and effort he has given to the work of this local Church during the past five years. His contributions are many, especially in the areas of communications, transparency and revitalizing our efforts in the area of pastoral planning and evangelization. We have greatly benefitted from his leadership and his dedication to Christ and the Church."

Msgr. Deeley said, "It is an honor and a privilege to be returning to the Archdiocese to assist Cardinal Seán at this important time in the life of the Church. With his recent Pastoral letter, the Cardinal has announced a renewed effort in evangelization. This is a wonderful time to be coming home to serve with our dedicated priests, religious, deacons and lay faithful in this effort of bringing the message of the Gospel to the people of the Archdiocese and to assist the Cardinal in the continued rebuilding of our beloved Archdiocese." He added, "In particular to my brother priests, who serve in our parishes, lead ministries of social justice, spread the Gospel of life, evangelize and bring the Sacraments to our Catholic family please know that I am hopeful that my work will be supportive of you and the vital ministries you carry out. We are called to be a Church which gives life to the love Jesus preached; in the carrying out of this mission I look forward to supporting our parishes, schools and ministries. The Holy Father provided me a wonderful opportunity to serve the worldwide Church and I will be forever grateful for his confidence and trust. I have enjoyed my work in Rome but I am grateful for the opportunity to return to the Archdiocese which has been such an important part of my life as a priest."

Fr. Erikson said, "On behalf of the entire Archdiocese we extend a warm welcome home to Msgr. Deeley. He is a superb choice by the Cardinal who will bring many gifts and expertise to the work ahead. I also want to thank Cardinal Seán for his confidence and support these past five years. He is leading our Archdiocese along a path of rebuilding and we should rejoice that he is our Archbishop. To the priests, deacons, religious, lay members and Pastoral Center staff I express my sincere gratitude. You have made the work we have done together rewarding and we have accomplished a great deal because of a shared commitment to continuing the saving ministry of Jesus Christ. I love being a priest and, in particular, a priest of the Archdiocese of Boston. To my brother priests, please accept my deep appreciation for all you have done to give glory and honor to God. I have been blessed by your support and prayers."

Msgr. Deeley was born in Cambridge, MA on June 18, 1946. He grew up in Belmont as the fourth in a family of five sons. His parents, Michael and Mary, now deceased, were born in Co. Galway, Ireland. The family belonged to Sacred Heart Parish in Watertown where he and his brothers attended school. Msgr. Deeley attended Matignon High School in North Cambridge where he graduated in 1964.

Following high school, having been inspired by the priests in the parish and encouraged by his family and the Sisters of Saint Joseph of Boston who taught him both at Sacred Heart School and Matignon, he entered Cardinal O'Connell Minor Seminary in Jamaica Plain to discern a vocation to priesthood. After two years of college he received a Theodore Basselin Foundation Scholarship and began Philosophy studies at The Catholic University of America in Washington, D.C. where he earned his A.B. degree in 1968. After a year of graduate school he was sent for theological studies to the Pontifical North American College in Rome. At the Pontifical Gregorian University in Rome he completed an S.T.B. in theology in 1972, and after a year of further studies in theology returned to Boston and was ordained to the priesthood on July 14, 1973 at Sacred Heart Church in Watertown, his home parish.

He was assigned as Associate Pastor to Msgr. Robert T. Kickham in St. Bartholomew parish in Needham, where he served for five years. In 1978, with his appointment as Secretary to the Metropolitan Tribunal of the Archdiocese of Boston, he began a ministry which would last for over twenty years in that office. The last ten years of that time he was named Judicial Vicar (1989-1999). Throughout that period, apart from his years of graduate study in Rome in Canon Law, he lived in parishes where he was able to serve as an Assistant Priest in residence; first, with Rev. Michael Doocey as Pastor, in Mary Immaculate of Lourdes in Newton Upper Falls (1978-1981), and then, after graduate school, and earning his Doctorate in Canon Law, in St. Brigid's Parish in Lexington (1985-1999) where Msgr. John P. Keilty, mentor and friend from his youth, was pastor. He also served with Rev. Eugene Curtin, who succeeded Msgr. Keilty. In October of 1999, he was named Pastor of St. Ann's Parish in the Wollaston section of Quincy. While Pastor of St. Ann's, he assumed the presidency of the Canon Law Society of America in 2000, a mark of the esteem his peers in the ministry of canon law held him. He was sent to his present assignment in Rome in September of 2004, first on a temporary basis at the request of the USCCB as an external collaborator, and then, at the request of the then Prefect of the Congregation for the Doctrine of the Faith, Joseph Cardinal Ratzinger, as an Official of the Congregation.

Msgr. Deeley's younger brother, Rev. Kevin J. Deeley, is also a priest of the Archdiocese of Boston and is currently serving as a Navy Chaplain with the rank of Commander. He is stationed in San Diego, though presently on duty at sea. His older brothers, Tom, Paul and John are married.

Fr. Erikson has served as Vicar General and Moderator of the Curia since 2006. Beginning in September, he will be participating in the Institute for Continuing Theological Education at the Pontifical North American College, Vatican City. He will return to the Archdiocese of Boston following the Institute to a new assignment in the Archdiocese beginning in 2012. He will also continue his service as an Air Force Reserve chaplain where he serves as Mobilization Assistant to the Deputy Chief of Chaplains at the Pentagon.

About the Archdiocese of Boston: The Diocese of Boston was founded on April 8, 1808 and was elevated to Archdiocese in 1875. Currently serving the needs of nearly 2 million Catholics, the Archdiocese of Boston is an ethnically diverse and spiritually enriching faith community consisting of 291 parishes, across 144 communities, educating approximately 42,000 students in its Catholic schools and 156,000 in religious education classes each year, ministering to the needs of 200,000 individuals through its pastoral and social service outreach. Mass is celebrated in nearly twenty different languages each week. For more information, please visit www.BostonCatholic.org .