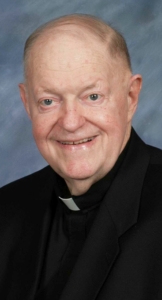 You would probably not forget meeting Father Tom Keane. He would be best described as an extrovert. He was warm, engaging, witty, ready with a joke or a story which, you could guess, no matter how many times he had told it he could bring up a great laugh as if it were the first telling, or hearing.

Thomas F. Keane was born in Boston's Dorchester section on April 2, 1930 a son of the late Thomas and Mary (Lydon) Keane. He was predeceased by his brother, Father Alfred Keane, Maryknoll missionary; and a sister Mary Anne Tripp. The surviving sibling is Judith Keane of Dorchester.

The family lived in St. Mark Parish and following elementary and secondary school, Thomas entered the archdiocesan seminaries and on completion of seminary studies, Auxiliary Bishop Eric MacKenzie ordained him to the priesthood at Holy Name Church, West Roxbury. Among those ordained with him on that Feb. 2 was Father George Emerson, another son of St. Mark Parish, who will also serve as the homilist at Father Keane's Funeral Mass.

Following his ordination he was assigned as an assistant at two archdiocesan parishes: St. Anthony of Padua, Allston (1956-1965) and St. Boniface, Quincy (1965-1966). During his years at Allston he saw a parish produce a rush of vocations to the priesthood; among the sons of the Allston parish who grew up there while Father Keane was assigned is one of the concelebrants of the Funeral Mass, Msgr. George Carlson, pastor of Holy Name parish.

In September 1966 he was released for service in the Chaplains Corps of the United States Air Force and served for the next 20 years on bases both in the US and overseas. He retired from the Air Force in 1986 with the rank of colonel. He returned to parish ministry as a parochial vicar serving in familiar surroundings at St. Ann in Boston's Neponset section, which shares a border with his home parish.

In January 1987 Cardinal Law named him pastor at another St. Ann Parish in Quincy's Wollaston section just a few stops on the Red Line from the Neponset parish.

After two terms and approaching 70 years of age he retired to the family home in Milton in October 1999. Although retired from administrative duties he readily made himself available to assist at two parishes in Quincy: St. Mary and St. Joseph; and also at St. Elizabeth in Milton.

In August 2001 he entered Regina Cleri, the archdiocesan home for retired priests, where he died on June 4.

Father Richard McCue, formerly of the archdiocese and now a priest of the diocese of Charlotte, a long time friend of Father Keane as well as Father Raymond Steen, OMI; Father Vincent Doolan, St. Joseph Quincy; and Father John Ronaghan, present pastor of St. Ann Quincy were also to be concelebrants.

Father Keane will be buried at Arlington National Cemetery with full military honors in August.