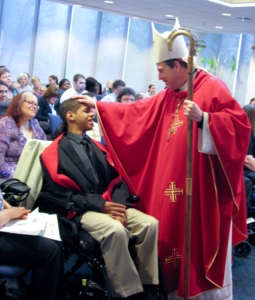 BRAINTREE -- On Wednesday, May 18, 2011 six Kennedy Day School students received the sacrament of Confirmation at the Franciscan Hospital in Brighton. Two students also received their first Communion during the liturgy.

Students were prepared for the sacraments by Sister Peggy Youngclaus, SND.

Formation was accomplished through the "All Faiths Program" held at the hospital. Catechesis centered around Gospel stories and included activities such as arts and crafts projects that helped make students aware of the person of Jesus and God's infinite love and mercy for humanity.

"It's a lot of on-hands kinds of activities that we do, all centered on the Gospel," Sister Peggy said.

Students also used booklets with pictures matching the photos already on their dynavoxes, touch screen computing devices which many students use to communicate.

During the May 18 Mass, the students responded to questions during Bishop Hennessey's homily using their dynavoxes.

"I was deeply moved by the faith of the candidates, and especially the parents," Bishop Hennessey said.

"Special thanks to the whole faculty and staff of the school," he added.

Sister Peggy said the Mass was important for the students because it is a significant event in which they can participate with their families.