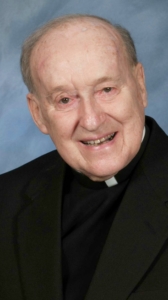 A priest with a missionary's heart who was one for only a brief time in his life, Father Wilfrid L. Pied died at Mount Auburn Hospital in Cambridge on May 29. He had been in declining health over the past months.

A Salem native he was one of the seven children of the late Napoleon and Celina (Noury) Pied. His sister Stella Cote of Salem is the surviving sibling of the five brothers and two sisters. He was educated by the Sisters of St. Chretienne at St. Anne (French) Parish School and went to high school in Joliette, Quebec. He returned to the US and entered St. John's Seminary, answering the call to the priesthood which he had heard many years prior.

He had always aspired to missionary work and although he was never strictly a missionary, in 1972 he went to the multi-island diocese of Agana, Guam and was an associate at St. Anthony Parish in Tamuning, and then pastor of St. Teresa in Agana. On his return to the archdiocese he was named associate at St. Joseph (French) Parish in Everett and in 1976 he became pastor of the parish. He served there until being named pastor of St. John the Evangelist (French) Parish in Newton where he served for one year until he was named parochial vicar at St. John the Evangelist in Canton in September 1992.

Cardinal Bernard Law granted him senior priest/retirement status on May 1, 1995. He remained in residence briefly at the Canton parish. He moved to Regina Cleri in 1997 but continued to assist at St. John for many years following.

Will, as he was known to brother priests, was a quiet gentleman. He was active and vigorous for most of his priestly life which probably contributed to his relative good health in later years.

Reflecting on his priesthood at the time of his retirement he said referring to parishioners he had served "I think that sometimes they have been more of an inspiration to me than I have been to them."

North Regional Bishop Peter Uglietto was to be the principal celebrant of Father Pied's Funeral Mass at St. Anne Church, Salem on June 3. His classmate and long time friend, Father William Lucey was to be the homilist.

Among those indicating that they would be concelebrating the Funeral Mass were Central Regional Bishop Robert Hennessey; classmate and friend, Father James Curtin, Regina Cleri; Msgr. James Tierney, Regina Cleri and Father James McCune who had been Father Pied's pastor in Canton; St. Anne's present pastor, Father George Dufour, and Father Raymond Kiley, currently parochial vicar at Sacred Heart, Quincy, who had been parochial vicar with Father Pied at Canton.