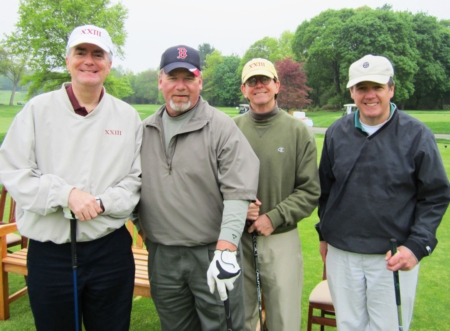 WESTON -- The 19th Annual Blessed John XXIII National Seminary Golf Tournament was held May 23 at the Weston Golf Club. This year's event raised nearly $100,000, the most successful tournament in its history.

The tournament benefits the educational program for more than sixty seminarians currently enrolled at the seminary, which has been in Weston since 1964. Blessed John XXIII National Seminary prepares second-career seminarians for the priesthood.

"There is an increasing need for more priests to serve the faithful of the Church," said the rector, Father William Palardy. "Our unique formation program is preparing parish priests to fulfill this need."

Established in 1964 by Cardinal Richard Cushing, Blessed John XXIII National Seminary is dedicated to forming men ages 30 to 60 for the priesthood. It was the first seminary in North America established for the formation of men answering the call to the priesthood at a later time in their lives. To date, candidates have come to the seminary from more than 120 dioceses and 20 religious communities. Almost 600 alumni serve in dioceses and religious communities throughout the world.