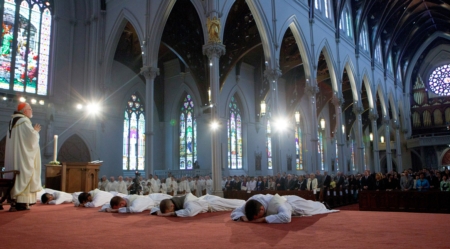 SOUTH END -- Though cloud cover lingered in the skies above the Cathedral of the Holy Cross at the beginning of the Ordination Mass May 21, by the end of the ceremony six men were ordained priests and it was a sunny, warm, and clear day outside.

Prior to the beginning of the liturgy, family and friends gathered in pews designated the ordinandi.

Ray Murphy Sr. recalled that when his son Mark was young, he didn't even want to be an altar server like his older brothers. However, by the time of confirmation during his sophomore year in high school, Father Murphy had begun thinking about the priesthood.

His older brothers are both married; one is a police office, the other a dentist.

"I'm a pediatric dentist, and Matty's a cop, and Mark's a priest and somehow I'm the disappointment," quipped Father Murphy's brother, Ray Murphy Jr. "It's an Irish Catholic family with a cop and a priest, I can't really contend."

Ray Murphy Jr. also said, "Proud doesn't even begin to encapsulate I think how all of us feel today about Mark and his hard work."

In his homily, Cardinal O'Malley's focused on the cenacle, or upper room, where Jesus held the Last Supper. He began his remarks with a reference to widely publicized claims of a fundamentalist preacher that the world would end later that day.

The cardinal's humor gave way to an impassioned message to the men to be ordained. He connected the experience of the first days of the early Church -- the Last Supper, Easter morning, and Pentecost -- to the Eucharist, the sacrament of confession, and devotion to prayer.

"In the cenacle, Jesus is calling on his priests to be the merciful face of the Good Shepherd, always anxious to seek out that one lost sheep and carry him home on his shoulders," said the cardinal in reference to confession.

Cardinal O'Malley concluded his homily with a call to mission for the new priests.

"Fidelity to prayer, friendship with Christ, closeness with Mary and with our brother priests, will prepare us to go forth like the Apostles at Pentecost, joyfully and enthusiastically announcing the glad tidings of the Gospel, the marvelous things of God, to a world that is so in need of hearing that good news. Welcome to the cenacle, let the rapture begin, God Bless you," he said.

Following the homily, the Rite of Ordination began with each candidate pledging obedience to Cardinal O'Malley and his successors. Then in a gesture of humility, the men laid prostate in front of the altar while the choir led the congregation in the Litany of the Saints.

After this, the men approached Cardinal O'Malley one by one, in front of the altar and knelt. He then placed his hands on their heads and prayed in silence. Along with the prayer of consecration that followed, this laying on of hands is central to the Rite of Ordination.

All the priests and bishops present also placed their hands on each of the candidates.

After the prayer of consecration, the newly ordained were vested by a priest of their choosing with the stole and chasuble, visible signs of the priesthood.

Each of the new priest's hands was then anointed by Cardinal O'Malley.

"The Lord Jesus Christ whom the Father anointed with the Holy Spirit and power, guard and preserve you that you may sanctify the Christian people and offer sacrifice to God," the cardinal prayed.

The newly ordained then exchanged the sign of peace with each of the priests in attendance.

After the distribution of Communion and before the end of the Mass, Cardinal O'Malley asked the new priests that they give him their first blessings. Then the cardinal knelt to receive the blessing from the men individually, kissing their hands after each blessing.

Following the Mass, family, friends and well-wishers greeted the men and received their blessings.

All the new priests, except Father Hurley, have been assigned to archdiocesan parishes. Father Hurley, as a member of the Franciscans of the Primitive Observance, will serve in their ministry.

For Father Lee, the consecration was the most memorable part of the Mass.

"What a different experience being on (that side of the altar, to) say those words, so profound," said Father Lee.