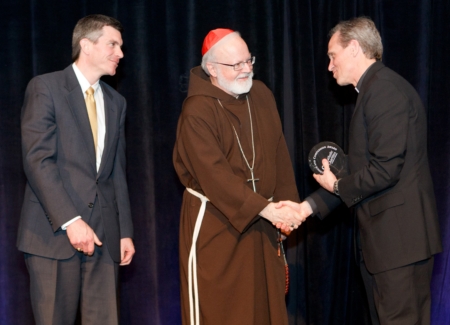 SOUTH BOSTON -- "Everything I am today I owe to Catholic Charities," Leosandra Santiago told the 575 people in attendance at this year's Catholic Charities Spring Celebration, held on May 18 at the Westin Boston Waterfront Hotel.

Five years ago, Santiago arrived in Boston full of hope for her future. A single mother, pregnant with her second child, she had left her homeland, the Dominican Republic, to better her life and her children's lives.

Reality, however, quickly set in. With no knowledge of the language, no friends or family to assist her and no place to turn for help, Santiago found herself living in a shelter.

"Every mother wants to be there for her children," she said. "But I felt like there was no place to start. I felt completely hopeless, like there was nothing I could do to help my daughters or myself."

It was at that shelter that she first heard of Catholic Charities.

"Catholic Charities showed me that there was something I could do, that I could become self-sufficient," she said.

Santiago enrolled in Catholic Charities' English for Employment program. She was able to feed her family with the help of one of their food pantries. She began to hope.

Today, she lives in her own apartment with her daughters. She is fluent in English and has a full-time job which she found through the English for Employment program. Her daughters, now 8 and 4, are well provided for.

"Catholic Charities is an organization who cares about people -- people like me, a single mother who came to this country with nothing but dreams," Santiago said.

"Thank you for your example of strength and courage in front of nearly impossible circumstances," Deborah Kincade Rambo, LICSW, president of Catholic Charities, told Santiago.

The gala, which raised a record $1.6 million, is the major annual fundraising event for Catholic Charities. It is also the occasion for the presentation of the Justice and Compassion Award to a person whose work embodies the values of Catholic Charities.

Serving as the evening's Master of Ceremonies was political columnist and commentator Mark Shields, a Weymouth native and graduate of Notre Dame.

The blessing was delivered by Sister Esther Garcia, SFA.

Addressing the attendees, Rambo highlighted the importance of providing support for all people in need -- from early childhood education to teen support to continuing education for adults.

"I can't stress enough the critical need for all of these resources to be available to families so that children can become successful adults and be able to maximize their potential in today's world," Rambo said.

"Together we are determined to make a difference," she added.

"Tonight, on behalf of all of my colleagues at Catholic Charities, and the clients we are so privileged to serve," she continued, "we simply could not do all that we do without each of you. Thank you."

This year's honoree at the Spring Celebration was Father Theodore Hesburgh, CSC, president emeritus of the University of Notre Dame. Father Hesburgh, who was unable to attend because of recent surgery, was the recipient of the 2011 Justice and Compassion Award for his tireless work advocating for those in need.

Father Hesburgh's career began at the University of Notre Dame in 1945 where he taught theology and served as a chaplain to World War II veterans and continues to the present day. In the past five decades Father Hesburgh has served on more than 150 advisory bodies, 16 of which he was appointed to by a sitting United States president, on issues such as nuclear disarmament, civil rights and famine relief.

"It really is our honor at Catholic Charities to be presenting Father Hesburgh with the Justice and Compassion Award. I can't think of anyone who deserves it more," Rambo said.

Father Jenkins noted that Father Hesburgh's life work embodies the desire for justice and his compassion for others.

"What was over and above, and really the foundation of it all, was his calling as a priest," Father Jenkins said. "That was the identity that did, and does, define everything he did. And I think his greatness lies so much in that -- that he never forgot who he was: a priest, a servant of God's people."

Father Jenkins spoke of the "great affinity" Father Hesburgh has with Catholic Charities, "an organization founded on Jesus Christ, on the work of Christ. An organization that goes out into the world to serve justice, to be compassionate to God's people."

"This is such an important event because it allows us be able to do so much for those who are in need," the cardinal said.

He added a special thanks to the Spring Celebration co-chairs, Brian Moynihan and John Mahoney, "for the wonderful work they have done in gathering this great group here."

Speaking to The Pilot after the event, Rambo echoed the cardinal's gratitude. "Brian Moynihan and John Mahoney really took on the challenge and helped us raise a record $1.6 million," she said, adding that given the current economy where federal and state contributions are "shrinking," there is a "greater need to fundraise so we can continue the level of aid we provide."

"We are thrilled to have this kind of support, not only financial support, but also the enthusiasm and the emotional support that all the people who attended the Spring Celebration provide. It was truly a wonderful evening," Rambo said.