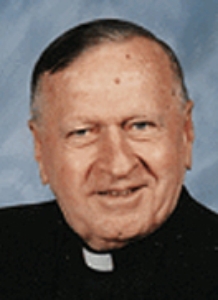 As a young seminarian in his last year of formation, William J. Haley a deacon of the archdiocese of Boston was sent to be a deacon prefect at St. Thomas Seminary located in Bloomfield in the then diocese of Hartford. During the summer of 1951 just before his ordination to the priesthood he had a summer assignment at St. Matthias Parish in East Lyme, Conn. Father William Haley died on May 14 following a short period of declining health. It was the feast day of St. Matthias.

Born in Hull on Oct. 20, 1927, William J. Haley was one of the eight sons of the late James and Mary (Corkery) Haley. Only their sister, Marie Doherty of Hull, survives of those siblings. He attended local schools and archdiocesan seminaries and Archbishop Richard J. Cushing ordained him to the priesthood at Holy Cross Cathedral on Jan. 10. 1952.

In February 1957 he was released for service to the United States Air Force as a member of the Chaplain Corps and served for the next 14 years at assignments at Steward AFB, Newburgh, N.Y.; Seattle, Wash.; Kansas; San Francisco, Calif.; Charleston AFB, S. Car. and further assignments in New York and Texas.

On his return to the archdiocese in 1971 he was named an associate at St. Catherine of Siena Parish, Norwood. Four years later, on Sept. 16, 1975 Cardinal Medeiros named him administrator of St. Mary Parish in Holliston and on April 17, 1979 the cardinal named him pastor of the Holliston parish.

For almost three decades he was the leader of the parish, never really seeing himself as the "boss" but always able to direct and guide. Priests assigned as his associates or parochial vicars were high in his praise both while they were with him and following their assignments. For them, the grass really was greener in Bill Haley's backyard. One of those priests is Father Mark A. Mahoney, presently pastor of St. Rose of Lima in Topsfield and once head of the Metropolitan Tribunal. He never stopped trumpeting Father Haley's virtues, leadership and priestly life.

During his tenure at St. Mary's helm, he saw a rapid increase in town and parish population. He directed a very successful capital campaign allowing the expansion of the parish plant but also expanded the number and breadth of parish activities as well as participation in those activities.

The tributes that poured in to his family and the parish almost six years since his departure were testimony to his great kindness and priestly zeal.

Following his "retirement" on Sept. 26, 2005, he helped in parishes, notably at St. John the Evangelist in Canton. For two pastors, Fathers Michael Doyle and Michael McLellan he was frequently on deck for weekday Masses, funerals, and Sunday Masses. Priests would joke that "You never really retired, Bill."