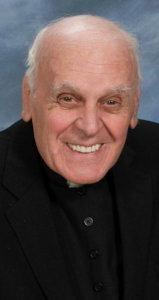 Just about four months ago the customary article about a priest, Father Thomas B. Morgan, retiring from his parish as pastor appeared in The Pilot's pages. Although he had been in poor health for some time and his retirement from Star of the Sea parish in Salisbury where he had been pastor for some 34 years was not unexpected, the unusually short time span between his retirement and his death was still surprising.

His journey home to God, fittingly, began in death on May 6, 2011 where it had begun on earth on July 28, 1929, in Salem. He was born in the "Witch City" the only son of the four children of the late Thomas and Mary Ellen (Sweeney). Only his sister Dorothy of Tuftonboro, N.H. survives, Mary Barletta and Ruth Morgan predeceased him. His aunt, Sister Mary Christopher (Nora) Sweeney, SMSM, also survives and is a Marist Missionary sister serving in Fiji.

The sparse listing of assignments on his official assignment card tells us that he had four assignments following his ordination on Feb. 2, 1995 by Archbishop Richard Cushing and his appointment as pastor in Salisbury by Humberto Cardinal Medeiros in 1976. Assistant at Our Lady, Help of Christians, Concord (1955-1958); Chaplain at Cambridge Hospitals, with residence at Sacred Heart, Cambridge (1958-1962); assistant at St. Jude, Waltham serving with fellow Salem native, Msgr. Edward McCabe; (1962-1965); and Assistant at St. Michael, Bedford (1965-1976).

A son of the archdiocese's second oldest parish, Immaculate Conception, Salem, he was educated in local schools and at Boston College. He entered St. John's Seminary and was ordained in 1955. After ordination he obtained additional degrees; an M.A. from Boston College and an M.Ed. from U Mass-Boston. He was also much involved with the Ancient Order of Hibernians, serving as Division chaplain, and also as State Chaplain for the Ladies Auxiliary, the women's branch of the AOH.

At his retirement from Salisbury in January of this year, parishioners were hoping that he would stay at the parish rectory as a senior priest in residence; he instead returned to his family home in Salem where he had been born and raised. For many, Father Morgan was the only priest they had ever known and for more the one they well remembered because of his more than three decade tenure as their pastor.

Father Morgan's Funeral Mass was celebrated at his home parish church, Immaculate Conception, Salem on May 11. He had been waked at both worship sites -- the parish church and the Beach Chapel -- in Salisbury the previous day. His classmate and friend, Father John Leonard was the homilist for the funeral Mass and he was joined by other of Father Morgan's priest friends and classmates.