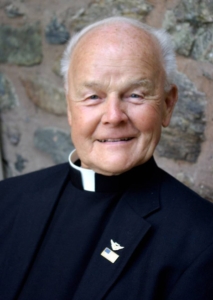 Father Dick Rieman, a priest of Opus Dei who resides at the Chestnut Hill Center, was a personal acquaintance of St. Josemaria Escriva when the two lived in Rome in the 1950s. Father Rieman, now 85, was studying canon law at the Angelicum in Rome, while St. Josemaria Escriva was working in the city and earning his doctorate in theology from the Pontifical Lateran University at the time.

Father Rieman, who joined Opus Dei in 1950 and was ordained a priest in 1958, spoke with The Pilot about his impressions of the recently-released movie "There Be Dragons," inspired by the life of St. Josemaria Escriva.

Q: From your perspective, what is director Roland Joffe trying to communicate with contemporary audiences about St. Josemaria Escriva?

A: I think the thing is that he was just trying to communicate the whole idea of forgiveness. For instance, like his attitude towards Manolo Torres (a fictional a former friend of St. Josemaria from his seminary days) was you make mistakes but that doesn't say I don't care for you because of what you do. He separated what we do and the person itself.

Q: What are your some of your fondest personal memories of St. Josemaria Escriva?

A: He was just a happy person. He just understood everybody, he just cared for everybody.

Q: St. Josemaria Escriva espoused the belief that one glorifies God not just by going to Mass but also through their everyday life. From your perspective, how did he live out that ideal?

A: He was very normal and very human. He put a lot of care into everything. He tried to imitate our Lord through everything he did. He was just a very human being. He said the greatest buildings in the world are built brick by brick by brick and that's what you do with life.

Q: What can contemporary Catholics learn from the example of St. Josemaria Escriva?

Q: What is it about the charism of Opus Dei that has resonated with so many people?

Q: Out of a possible four stars, how many stars would you give it and why?

A: I look at movies from a different viewpoint -- what good does the movie do. There are movies that don't do that much good and then there are movies that really get a good message out there. I would call it a four. Technically, it was good and the acting was wonderful, but I would measure it saying: Did this movie get a nice message out to people?