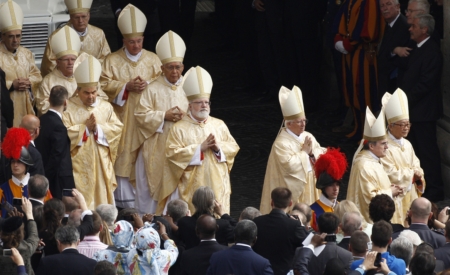 'The Mass of Beatification itself was a glorious celebration. Pope Benedict delivered a magnificent homily, which was so personal because of his years of close collaboration with the Holy Father.' CNS photo

Last Sunday (5/1), of course, we were blessed to celebrate the beatification of Pope John Paul II in Rome. I was happy to be a part of that celebration.

As I have said so many times, I never thought I would live long enough to know two people who were beatified -- and know them so well having been with them many, many times -- Pope John Paul II and Mother Teresa.

Since the time I was a young priest, I had met both of them on a number of different occasions, and have had wonderful opportunities not only to be with them, but to have conversations with them, listen to their wisdom and observe their deeds. So, being at Mother Teresa's beatification, and now John Paul II's, was just a thrill. Certainly no other human being was seen by as many people on the planet as Blessed John Paul II. It's obvious that the lives of the people who saw him personally, or even just heard him, were transformed by his ministry. It is because of this impact he had that so many people wanted to be a part of this celebration. Estimates are that there were about 1.5 million people in Rome for the beatification.

The Holy See, very wisely, planned a number of events because it would have been very frustrating if people had gone with their hearts set on being at the beatification Mass ended up being several blocks away from St. Peter's because they could not get near it.

So, there was a beautiful vigil Saturday night at the Circus Maximus with the praying of the rosary and a recorded message from the Holy Father. There were also witness talks by Sister Marie Simon-Pierre, who was the French sister cured of Parkinson's disease through the intercession of Blessed John Paul; Cardinal Stanislaw Dziwisz, who had been Pope John Paul's personal secretary for so many years, and Dr. Joaquin Navarro-Valls, who had been the communications director of the Holy See and was very close to John Paul II.

The Mass of Beatification itself was a glorious celebration. Pope Benedict delivered a magnificent homily, which was so personal because of his years of close collaboration with the Holy Father. Virtually the whole College of Cardinals was there and they were all invited to concelebrate the Mass. I was very pleased, because I did not think we would all concelebrate. After the Mass, we went in procession back into the basilica, where we were able to venerate the body of Pope John Paul II.

We were followed by the heads of state -- which were many -- and finally by the people. The basilica remained open until about 3:00 in the morning. I went to the plaza at about 11:30 at night and there was still a column of people waiting to venerate the body.

The next day (5/2) there was a Mass of Thanksgiving, where Cardinal Bertone celebrated Mass in the piazza in honor of the new blessed. That also attracted hundreds of thousands of people.

After that Mass, the body was transferred to the altar of St. Sebastian. That altar is between the Blessed Sacrament Chapel and the Pieta as you go into the basilica on the right hand side. It's very accessible and very visible -- a wonderful spot for it.