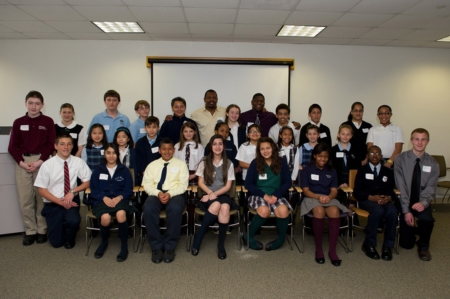 Father Paul O'Brien, founder of the Cor Unum Meal Center and pastor of St. Patrick Parish in Lawrence, was the recipient of the 2011 Senator Paul E. Tsongas Award for Exemplary Community Service at the Excellence in Government Awards luncheon. The event was hosted by the Greater Boston Federal Executive Board and took place at John F. Kennedy Presidential Library and Museum.

The luncheon was attended by over 300 people, and recognized the contributions of federal employees to the community. The event also honored the Armed Forces, celebrated the 50th anniversary of President Kennedy's inauguration and recognized the creation of the Peace Corps.

In recognition of Father O'Brien's award, the Mike Lowell Foundation, established by the Red Sox third baseman, made a $30,000 donation to Cor Unum.

Cor Unum opened in 2006 and to date has served over 200,000 free, nutritious meals in a restaurant-style enviroment to the hungry in the Lawrence area.

On June 4, Father Frank Pavone, the national director of Priests for Life, will speak at St. Paul Parish in Hingham. He will speak at all Masses that weekend, as well as deliver a talk at 7:30 p.m. in the school hall.

The event is hosted by the parish's pro-life committee.

Father Pavone is expected to speak about the pro-life movement today and the prospects for hope and healing for those who suffer from the effects of abortion.

Catholic Memorial School in West Roxbury will host a class reunion for those classes that graduated in years ending in 1 or 6 on June 10 and 11.

The Class of 1961 will celebrate its 50th reunion, the first such reunion in the school's history, on June 10. The reunion will feature tours, the Catholic Memorial Memory Project, Mass, a class reception and dinner. On June 11, beginning at 3 p.m., all reunion alumni will be invited to the tour the school, hear a presentation from president Paul Sheff, celebrate Mass, take class pictures and reminisce over a clambake dinner with classmates and faculty.

Keynote speaker at the breakfast was Rudy Favard, a Malden Catholic High School senior who made national news for assisting the family of Sammy Parker by carrying the boy to bed numerous nights per week. Parker suffers from cerebral palsy.

St. Joseph School in Haverhill is being considered for a $50,000 Pepsi Refresh Grant to build a new playground. The school has the month of May to accumulate enough votes from the public to qualify for a grant.

Voting takes place online, via Facebook and through text.

The playground project, which has been named Project H.O.P.E. (Help Our Playground Evolve) in memory of their late pastor Father Dennis Nason who died last fall, is being sponsored by the school's PTO.

The school says its existing playground is essentially a fenced in parking lot, uneven and unattractive. The new playground will not only feature a play structure for the students, but it will also impact city officials' efforts to revitalize the mill city.

Information on supporting the effort is available at the school's website www.sjshav.com.