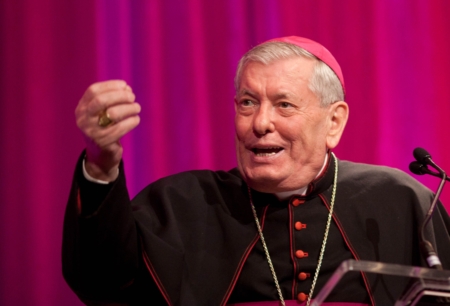 BRAINTREE -- Archbishop Pietro Sambi, the Apostolic Nuncio to the United States, will be honored at Redemptoris Mater Archdiocesan Missionary Seminary's second annual gala dinner May 15 at 5 p.m. at the Lantana in Randolph.

"We are very, very happy to benefit from the grace of his presence," said Father Antonio Medeiros, the seminary's rector. "It is certainly something that can help all of us."

Local businessman and Catholic philanthropist Jack Shaughnessy will also be honored for his long-standing support of the Church.

Father Medeiros said the nuncio was an ideal honoree because of his solid understanding of the Church in Boston.

Father Medeiros said that when he spoke to the nuncio he felt the nuncio had "a paternal connection with the Church here."

"His words are laden with hope for the way the Church and the Lord are operating here in this corner of the world," Father Medeiros also said.

In addition to supporting the work of the seminary, Father Medeiros said the purpose of the gala is to raise awareness of its mission.

Redemptoris Mater Seminary of the Archdiocese of Boston was opened by Cardinal O'Malley 2005 and saw its first ordination in 2009. The seminary provides a formation which is both diocesan and missionary. The men ordained from the seminary are ordained for the Archdiocese of Boston; however, they are also willing to serve the Church anywhere in the world that they are needed.