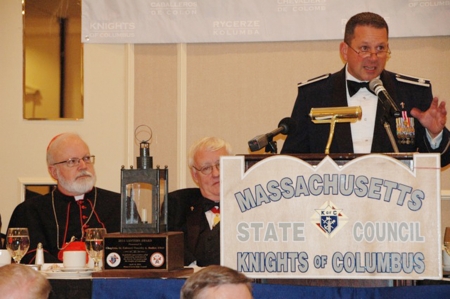 'This year the Lantern Award was given to one of our Boston priests, Father Timothy Butler, a lieutenant colonel in the Air Force.' Pilot photo/CardinalSeansBlog.org

The Massachusetts National Guard works with the Paraguayan military to support U.N. missions and provide internal governmental support. Additionally, they offer medical services to those in need in the countryside. When I was in Paraguay last December, I met with the U.S. ambassador, and she told me the Massachusetts Guard were working in Paraguay. They had heard about my visit there and tried to see me at that time, but they weren't able to reach me. So they came to pay me a visit now. I was unaware there was this Massachusetts connection to Paraguay, but I was happy to learn about it. They are supporting a school, helping to run clinics and training the peacekeeping forces.

I begin Holy Week by visiting a parish, but then I am at the cathedral the rest of the time.

Back at the cathedral Sunday (4/17), I was visited by the Hispanic community from St. Mary's in Waltham. They came for afternoon vespers and they asked for a blessing with the Relic of the True Cross, which I was pleased to give them. They were accompanied by their pastor, Father Michael Nolan, and the parochial vicar, Father Macias.

Each year on Patriots' Day (4/18), the Boston Marathon is run and the Knights of Columbus have a dinner for the whole state membership and leadership. At that dinner, they present the Lantern Award, harkening back to the lanterns of Paul Revere on his famous ride through Boston.

This year the Lantern Award was given to one of our Boston priests, Father Timothy Butler, a lieutenant colonel in the Air Force. He has been in the Air Force for many years and has been on six deployments to Iraq and Afghanistan. He gave a very beautiful reflection on his vocation as a chaplain.

Meeting with pastors and directors of religious education

On Wednesday (4/20), I attended a meeting we hosted at our Pastoral Center for pastors and directors of religious education. Each year, our Office of Religious Education organizes a gathering for parish catechetical leaders to pray about their work and dialogue about what their doing to form our young people in the faith. Susan Abbott, Susan Kay, and Pilar Latorre, who staff that office, do a wonderful job bringing this group together and planning the afternoon.

I addressed the group and afterwards stayed to listen to two pastors and two DRE's speak. They were very, very good. We heard first from Marie Kopf, the director of religious education at St. Patrick Parish in Stoneham, and her pastor, Father Bill Schmitt. Then, we heard from Father Bill Minigan and DRE Buffy Walsh, of St. Joseph's in Malden. All talks underscored the important relationship pastors and DRE's have with one another and the important ways they collaborate in passing on the faith to our young people. The remarks were very encouraging.