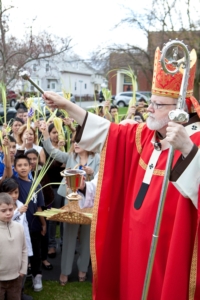 Palm Sunday, officially called Passion Sunday, marks the start of Holy Week and commemorates Christ's triumphant entry into Jerusalem. The people, recognizing Jesus as king and Messiah, cut palm branches and laid them on the road before him. Only days later, the people of Jerusalem would call for his crucifixion. Christ's passion and death are recounted in the day's Gospel reading.

The cardinal began the celebration with the traditional blessing of the palms and procession. He also served as the principal celebrant and homilist for the Mass, which was celebrated in Spanish.