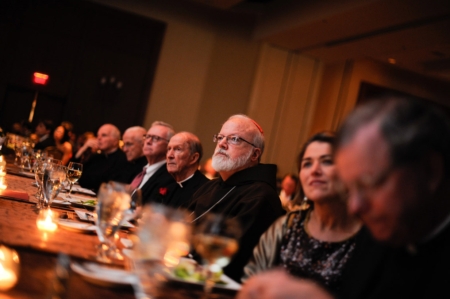 'The New England Province of Jesuits sponsors the dinner each year to support the works of the province, particularly the support retired Jesuits and its formation program.' Pilot photo/CardinalSeansBlorg.org

Last Wednesday (4/6) I had a trustee meeting at Blessed John XXIII National Seminary in Weston. In my opinion, it's the premier second-career seminary in the United States.

At the meeting we discussed the plans for the future. We're very pleased with the success, and that the enrollment continues to grow. We're very proud of Blessed John XXIII and grateful for the excellent work that Father Bill Palardy is doing as the rector.

Tuesday night (4/12) I attended the 11th Annual Jesuit Gala dinner. The New England Province of Jesuits sponsors the dinner each year to support the works of the province, particularly the support retired Jesuits and its formation program. It was a very large event, with about 1,400 people.

The Jesuit presence in the archdiocese is an historic one. They have two retreat houses here ? the Campion Retreat Center in Weston and the Eastern Point Retreat House in Gloucester. They also work at BC High in Dorchester and Nativity Prep in Boston. The order also has missions in Jordan and Jamaica.

All three institutions have very rich histories but I always find it particularly interesting that the College of the Holy Cross was named after our cathedral. The college was originally part of the archdiocese but was placed far from the city when it was founded for fear of the Know-Nothings who had just burned down the Ursuline convent in Charlestown.

On Wednesday I attended a gathering at Regis College, in Weston, where presidential scholarships are given out to students from the various Catholic high schools in the archdiocese.

The Regis College Presidential Catholic Scholars Program offers superior students, based upon their academic record but also on their community involvement, full tuition scholarship to the college. This is the third year that Regis College has done this and we are very grateful.

In my meetings with college presidents, I have stressed the need for Catholic schools to cooperate with each other and to create a continuum of education from pre-K through the university level. All of the college presidents have been very good about helping to train teachers and administrators and to do things to enrich our Catholic schools. This is certainly one of the ways we support our Catholic schools ? by helping our graduates of Catholic high schools get into Catholic colleges. We're grateful to Regis President Mary Jane England and Vice-President for Enrollment Management and Marketing Paul Vaccaro for this program.

The family of one of the recipients I met is from the West Indies. When I met her, I immediately commented that she had a West Indian name, Sade Callwood. It turns out her family is from the islands and that we had many mutual friends and experiences.

Congratulations to all the students! We are so happy to see so many of our best Catholic high school students helped to attend one of our fine Catholic colleges.