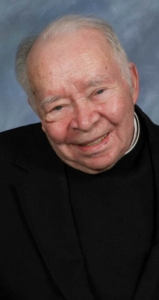 A priest who spent 46 of his 84 years in the archdiocesan seminaries as a student, teacher, dean and finally rector, Msgr. Thomas J. Daly, died at Regina Cleri Residence on April 4.

A native of Dorchester who was raised in St. Peter Parish, he was the older of the two sons of the late Thomas and Agnes (Cusack) Daly. He was taught by the Sisters of Charity of Halifax at St. Peter Grammar School, and by the Jesuits at Boston College High School. As he once said "At B.C. High we received a strong classics based education; that's probably what made me pretty good at language and made me appreciate the classics."

Sensing a priestly vocation, influenced by his family and especially the priests at St. Peter Parish, after graduating from BC High in 1944 he entered St. John's Seminary. He told The Pilot that one of the parish's priests, Father, later Msgr., William Conley stood out as an exemplary priest. "He was kind. And he could not do enough for people."

Archbishop Richard Cushing ordained him to the priesthood of Jan. 10, 1952 at Holy Cross Cathedral and assigned to the only parochial assignment he would have in his more than 59 years of priestly service -- assistant at St. Mary of the Nativity in Scituate. The assignment lasted for all of 18 months. He returned to the seminary where he would serve for the next 38 years.

For 30 of those years he was assigned to various responsibilities at the seminary college of the archdiocese first teaching French (1953-1983), then serving as dean of students (1963-1983) and later both. His first years were at the minor seminary (first two years of college) at Cardinal O'Connell Seminary in Jamaica Plain, and then when the minor seminary was merged with the philosophy house, then housed at St. Clement Hall, Brighton he continued as both dean of men and professor. In June 1976 he became the dean of the college assuming overall responsibility for all aspects of the seminary college's formation program.

During these years he also completed graduate work in French Literature receiving a masters degree at Boston College and a Ph. D. at Tufts University.

Former students, spanning more than 30 ordination classes recalled stories about "T" and how he handled situations and people. The consensus seems to be that he was an understanding man, who tried to maintain the required discipline in the house, at the same time not being overbearing. He seems to have understood the age of the seminarians and also the times in which they were in the seminary.

One of his many talents was his ability to deliver a good homily: related to the Mass of the day, usually appropriately illustrated with a story or two. He was clearly a man of letters who could draw on classics, French literature or contemporary society.

He also had a great sense of humor and could weave a tale; as someone said "He told great stories and even some of them were true."

Following completion of his term as rector in 1991, he was named as Director of the Implementation of the Archdiocesan Synod celebrated in 1988. With care and patience he helped bring the vision proposed for the archdiocese at the Synod to reality. He was also the administrative assistant to the Moderator of the Curia serving with both Bishops Alfred Hughes and William Murphy.

In his retirement which he began in 2000 he lived at Regina Cleri where he was a fixture and where the priests, many his own contemporaries and some his former students, echoed sentiments of esteem for him. His memory was encyclopedic and a great regret is that his historical knowledge was not recorded for future historians of both the seminary and the archdiocese.

He and the late Msgr. Richard Cunningham began great friends, while "T" was rector and Dick the professor of Canon Law. They were seen frequently together at local eateries favoring the Venetian in Watertown Square, where they were both well known and liked especially by the staff.

The two had been named Prelates of Honor by Pope John Paul II in April 1998.

Even as his physical health declined his keen mind remained alert and the memory seemingly intact. Up to a few day before his death he was aware and communicating with visitors at Regina Cleri.