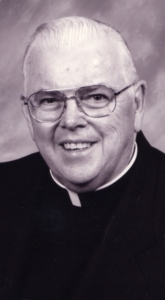 Father Richard Brady, who was pastor of St. Joseph Parish in Woburn from 1986 to 1990, died at St. Patrick Manor in Framingham on March 30. He was 79 years old.

A native of Woburn, he was the younger of the late Patrick and Elizabeth (O'Brien) Brady's two children; his older sister, Margaret Gosselin of Burlington survives him. He was raised in St. Charles Borromeo parish and attended the parish elementary school before going on to high school at Christopher Columbus in Boston's North End. Sensing a call to priestly life and ministry he entered the seminary of the Stigamtine Fathers and Brothers, but after two years returned to Woburn. He worked for a year as a stock boy in a local business, and then went to Boston College and from there to St. John's Seminary where he completed his seminary studies.

Richard Cardinal Cushing ordained him to the priesthood at Holy Cross Cathedral on Feb. 2, 1959, making him a member of the first class ordained by the newly named cardinal.

His first assignment was as an assistant at St. Anthony of Padua Parish, Cohasset where he remained until his appointment as assistant at St. Theresa of the Child Jesus Parish, Watertown. In late 1968 he was named an associate at St. Angela Merici Parish in Mattapan.

He went back to Woburn in 1977 being named associate at St. Barbara Parish, and then in 1985 he went to St. Joseph Parish, also in Woburn serving first as administrator (1985) and then as pastor (1986-1990). In 1990 he was appointed parochial vicar at St. Mary parish, Foxborough, and in 1993 to the same position at St. Joseph, Somerville. He returned to responsibilities as pastor in 1995 when he was named pastor of St. Francis of Assisi (Lithuanian) Parish in Lawrence.

Cardinal Bernard Law granted him senior priest status in 2001 and he lived at Youville House, Cambridge until 2006 and since then has been at St. Patrick Manor, Framingham.

Always a genial man, he loved people and he really loved to travel with people. In many of his assignments he quickly organized parish trips by bus or plane. He and his fellow travelers, often more rightly pilgrims, saw many places in the U.S., Canada and around the world.