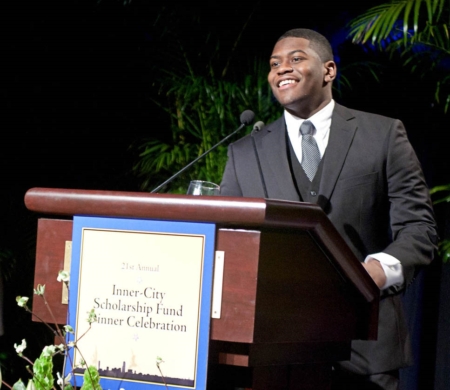 Rudy Favard delivers his keynote address at the ICSF dinner. Favard, who carries an eight-year-old boy with cerebral palsy to bed several nights each week, discussed the impact Catholic education has had on his life. Pilot photo/ Jim Lockwood

BOSTON -- Through the example of Rudy Favard, friends of the Inner-City Scholarship Fund saw firsthand the value of supporting Catholic education.

Favard was the keynote speaker at this year's Inner-City Scholarship Fund Dinner Celebration at the Boston Marriott Copley Place March 31, which raised a record-setting $2.4 million for need-based scholarships to inner-city students to attend area Catholic schools. The dinner was attended by about 850 people.

Some schools, such as St. Mary of the Assumption in Brookline, St. Mary of the Annunciation in Melrose, Elizabeth Seton Academy in Dorchester and St. Rose in Chelsea, were represented by academic projects. Attendees were able to view the projects prior to dinner.

Entertainment for the evening was provided by students of St. Peter School in Cambridge. Students sang songs from the musical "Les Miserables." St. Peter's was the first elementary school to be granted permission to perform numbers from the musical.

Favard attends Malden Catholic, a Xaverian Brothers school, with the help of a scholarship provided by the Inner-City Scholarship Fund.

Four nights per week, Favard, a senior and captain of the Lancers' football team, visits the nearby home of 8-year-old Sam Parker and carries the boy to bed. Parker has cerebral palsy and is non-verbal.

The boy's father used to carry him upstairs to his bed daily, but recent heart surgery has left him unable to lift his son, who weighs only 75 pounds.

Speaking with The Pilot afterwards, Favard said he will continue carrying Parker to bed until he leaves for Sacred Heart University in the fall. Favard plans to study marketing and management there.

"I'm really hoping the Parker family gets the house they need," Favard said.

Following the dinner service, a clip from ABC News on Favard's background was played for attendees and he made his keynote address.

In an on-line article accompanying the ABC News clip the Parkers said are hoping to move to a house without stairs.

During his speech, Favard thanked the audience for the opportunity to attend Malden Catholic, which he said was life-changing.

"Through my mother's determination and your hands, donors of the ICSF, God made it possible for me to get an education," he said. "You have forever changed my life."

Following the speech, dinner chairmen Jack Connors and Ted Kelly presented Favard with a $5,000 scholarship. Connors said that money was put towards this award in lieu of party favors for attendees.

"The story of Rudy and the Parkers is an amazing story, but it couldn't have been told if donors hadn't provided Rudy the opportunity to attend Malden Catholic (High School)," Reardon said about Favard.

Archdiocese of Boston school superintendent Mary Grassa O'Neill, who attended the dinner, praised Favard when speaking with The Pilot following the event.

"Rudy Favard is exactly what we want Catholic-educated students to be," she said. "He's smart. He's humble and he's giving service to others."

"He certainly lives the Xaverian charism," she added.