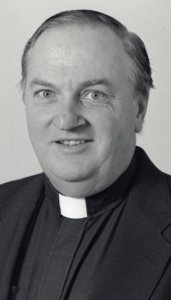 A priest of the archdiocese since his ordination on May 19, 1973, Father James Kelly has been named pastor of St. Andrew Parish in Billerica. Cardinal O'Malley made the appointment effective March 15.

Born and raised in Cambridge he was one of the 10 children of the late Robert and Alice Kelly. He attended Blessed Sacrament Elementary School and then travelled north in the city to North Cambridge Catholic High School from which he was graduated in 1965. He attended archdiocesan seminaries in Jamaica Plain and Brighton prior to his 1973 ordination by Cardinal Humberto Medeiros.

Asked about significant influences on his life he cited the priests at his home parish, Blessed Sacrament, Cambridge, and the Dominican Fathers who were the chaplains at North Cambridge Catholic High School.

He is looking forward to his first assignment as pastor and expressed his gratitude to Cardinal O'Malley for this appointment and "looks forward to serving God's people at St. Andrew parish...sharing the Word of God and doing His work among them."

Already arrived and serving at the Billerica parish, Father Kelly will be installed in the parish on May 14 by Merrimack Regional Vicar, Father Arthur Coyle.