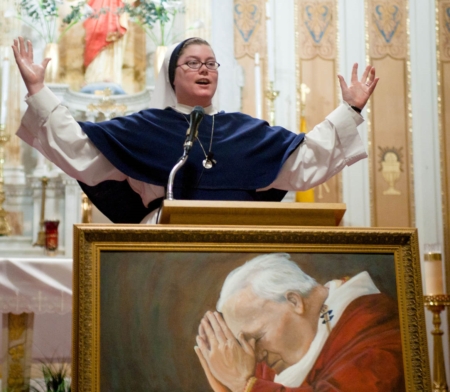 Sister Mary Karen Toomey, of the Sisters of Life, delivers her keynote address the evening of April 2 at the Eucharistic Congress for College Students and Young Adults. Sister Toomey's talk was entitled "The Culture of Life: The Legacy of John Paul II" and discussed the late pope's legacy promoting the Gospel of Life. Pilot photo/ Jim Lockwood

"He's one of the greatest popes who ever lived," said Josh Dell'Aria, 21, a junior at Anna Maria College in Paxton and parishioner at St. Charles Borromeo in Woburn. "He was always talking to young people and about young people."

The fourth annual Eucharistic Congress for College Students and Young Adults, held this year on April 1 and 2 at Sacred Heart Church in Boston's North End, was themed "Be Not Afraid," and celebrated Pope John Paul II, who will be beatified May 1. The event drew over 400 people.

It was co-sponsored by the Archdiocese of Boston's Vocations Office and the Office for the New Evangelization of Youth and Young Adults.

The same monstrance was used for evening adoration and the eucharistic procession Saturday night through the streets of the North End.

"I think it is very significant in that one of the reasons John Paul II had the monstrance made and sent it to the United States was for that purpose -- that many young people would come to see what their call in life was," Father Hennessey said.

Saturday's events included a talk by Andreas Widmer, which explored how young adults can integrate their faith with their work.

Now a Boston-based business consultant advising business executives on promoting just business practices and innovative solutions to poverty, Widmer was member of the pope's Swiss Guard from 1986 to 1988.

Following Widmer's talk, attendees went to various locations in and around Boston to perform service projects.

Kathy Reda, a lead organizer of the congress, said the purpose of the service projects is to combine faith and good works.

"They're not two separate silos," she said. "We have to be witnesses and live our lives for Christ."

"It kind of opened your eyes to all the things you should be thankful for," she said.

Suzette Pocsics, 29, came to the Eucharistic Congress all the way from St. Catharine Church in Pelham, N.Y., near New York City. For her service project, she helped make rope rosaries, which she called a "peaceful project."

"It symbolizes the fact that we need more prayer in this world," she said.

After the projects, participants returned to Sacred Heart Church for Mass with Cardinal Seán P. O'Malley.

During the Mass, the cardinal wore a purple chasuble with the seal of Pope John Paul II on the back. The cardinal later explained that it had been a gift from the head of the Swiss Guard after the late pope's funeral in 2005.

During his homily, the cardinal discussed the centrality and importance of the Eucharist to Catholics.

"The Eucharist is Christ's saving presence in the community and our spiritual food is the most precious possession we can have in our Church's history," Cardinal O'Malley said.

He also discussed the Eucharist's impact on living the Catholic life.

"The Christian who takes part in the Eucharist learns to become a promoter of peace in every situation," he said. "May we be transformed by our contact with the Eucharist and be energized to promote the Gospel of Life and a civilization of love."

Dinner for all attendees was donated by the various Italian restaurants of the North End.

Following dinner and a session of praise and worship music provided by Jon Niven and his band, Sister Mary Karen Toomey, of the Sisters of Life, gave a talk entitled "The Culture of Life: The Legacy of John Paul II."

"He brought us out of the culture of death and into a culture of life, out of darkness and into light," she said.

She also said how the pontificate of John Paul II helped her to more thoroughly embrace her faith as a young adult Catholic.

"He was mine," she said. "But more importantly, I was his. He claimed me as his own in Christ."

Her talk was followed by eucharistic adoration and the procession through the streets of the North End.

Joining Cardinal O'Malley, the attendees processed with the monstrance blessed by Pope John Paul from Sacred Heart Church to nearby St. Leonard of Port Maurice Church where the Blessed Sacrament was reposed. During the procession, they carried candles and sang adoration hymns. Twice along the way and once in the Peace Garden at St. Leonard's, adorers stopped and knelt before the Blessed Sacrament.

As the procession was going, passersby and bystanders stopped and took interest in the proceedings.

Father Matt Williams, head of the archdiocese's Office for the New Evangelization of Youth and Young Adults, said that when planning the Congress, organizers noticed April 2 was the sixth anniversary of Pope John Paul's death.

"Every year we try to feature a different saint. We thought 'what a great contemporary Catholic hero to feature -- John Paul II," Father Williams said. "In the midst of planning, the Vatican announced John Paul would be beatified. It turned out to be a prophetic decision."

Attendees reflected on the impact the late pope continues to have.

"His whole theology of the body is essential to the youth of today," said Elisabeth Reer, 20, a junior at Boston College.

"You don't hear a lot about that," she also said. "It's very encouraging to know the pope is concerned about the well-being of women and men."

Father Hennessey said Pope John Paul was highlighted during the two-day event because of his love for youth.

"Even after his passing to the Lord and his entrance into eternal life, he still inspires us," he said.