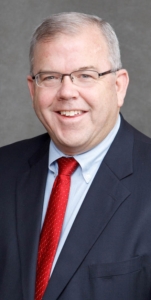 BRAINTREE -- The state's Catholic bishops have tapped an attorney with experience in state government to be their next advocate on Beacon Hill.

On April 5, the bishops announced that James F. Driscoll has been named Executive Director of the Massachusetts Catholic Conference (MCC), the public policy arm of the state's Catholic bishops. He will begin work on April 25.

"I'm honored to be able to be chosen and to be an advocate for Cardinal O'Malley and the bishops of Fall River, Springfield and Worcester," Driscoll said.

Driscoll replaces outgoing interim director Gerry D'Avolio, who had served on a temporary basis since September upon the death of Edward Saunders.

"He is an experienced professional and dedicated Catholic who shares our common belief regarding the important role and mission of the Church," the bishops jointly said.

"The Catholic Church in Massachusetts plays a pivotal role across a wide landscape that intersects secular society and the ministry of the Church. We seek to reach common ground on many issues, while working to advance the important positions of the Church in the areas of life, human dignity and social justice," the statement continued.

"We extend our deep gratitude to Gerry D'Avolio for his steady and experienced leadership these past many months and for his commitment to MCC over many years," they said.

"He has spent much of his life working on behalf of the Church and we are blessed by his dedication," they added.

Driscoll spoke with The Pilot about his role as executive director and some important tasks that he says lie immediately ahead.

"I think my major overall goal is to be an advocate for the cardinal and the bishops with the legislature, and continue to improve the relation the conference has with Beacon Hill and try to be an effective spokesman for issues the Church is facing," he said.

Driscoll anticipated he would be speaking with state lawmakers about expanded gaming legislation, which has surfaced on Beacon Hill in recent years, as well as the upcoming state budget.

His previous public service was as general counsel and assistant executive director for the Massachusetts State Lottery Commission, beginning there in 1984. He started his career as legal counsel in the state treasurer's office in 1983.

A resident of Scituate and father of four children, Driscoll has served as a lector at St. Mary of the Nativity Parish in Scituate since 1990. He also served on the Scituate Knights of Columbus, and as a board director and coach at the Scituate Youth Center.

Driscoll is a 1973 graduate of Xaverian Brothers High School in Westwood, and a 1977 graduate of Providence College. He earned his law doctorate from Suffolk University in 1981.