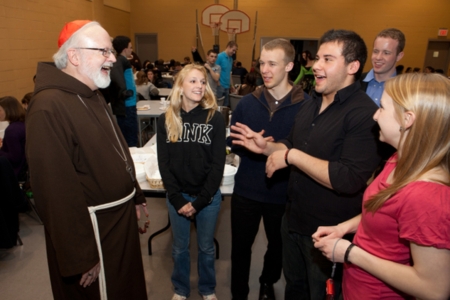 'In many ways, these young people who bring such high energy to their studies and professional life bring the same sort of enthusiasm to their participation in the life of the Church, which is a great blessing for us.' Pilot photo/CardinalSeansBlog.org

Last Thursday (3/24), I was at Stonehill College for a dinner celebrating Trinity Catholic Academy in Brockton. The annual dinner is known as the Shields Founders Award Legacy Gala. Over 300 people attended this year. There were several honorees that night.

John Fish, of Suffolk Construction Company, received the Thomas F. and Mary J. Shields Founders Award for his commitment to Catholic education and generosity towards Trinity Catholic Academy. Unfortunately, he was not able to join us that night. Mark DiNapoli, the president of Suffolk Construction, received it on John's behalf. Tom Shields and his family were there. They're the ones who have initiated this award.

Everyone is pleased how much the school has progressed since it was revitalized in 2007 as part of the Campaign for Catholic Schools' 2010 Initiative. The school continues to grow in its enrollment and academic scores have improved. But the success goes beyond the academic. The children are also excelling in music and sports -- this year the boys' varsity basketball team won their league tournament, completing a perfect 18-0 season.

Sunday morning (3/27), I went to Redemptoris Mater Seminary for the Admission to Candidacy for the Priesthood for one of the seminarians, Felipe de Jesus Gonzalez. He's had a very interesting iter. He is Mexican-American and speaks Spanish, which is a great advantage for ministry in Boston. Also, during his formation, he has spent several years doing missionary work with an itinerant team of catechists of the Neocatechumenal Way in India and Pakistan. Some members of his Neocatechumenal Way community from St. Tarcisius in Framingham were there to witness the rite. After lunch, we sang a number of songs in Spanish, Portuguese and English.

That evening (3/27) I was at St. Paul Parish in Cambridge for a Mass with the Catholic community at Harvard University. We celebrated the student Mass in the lower church.

Father George Salzmann and Father Bill Murphy, who are working at the chaplaincy, were there. It was an opportunity for me to thank Father Bill Murphy because his tenure there is winding down as he is preparing to go to his next assignment at the seminary. He is going to be replaced by Father Matt Westcott, who is coming from St. Mary Parish in Foxboro where he is parochial vicar. Our college chaplaincy program is a very important part of our ministry in the archdiocese, with close to half a million university students. The Harvard chaplaincy is just one example of the great work that is being done throughout the archdiocese. ...The students are very responsive to the ministry. In many ways, these young people who bring such high energy to their studies and professional life bring the same sort of enthusiasm to their participation in the life of the Church, which is a great blessing for us.